Friday in Kauai started very early which I will have to include at another time. I’ll just have to leave you hanging…

My cousin arrived back at the house after dropping off my nephew at day care, and she finished majority of her work for the day already. We were planning on going to the Grand Hyatt and taking advantage of a spa certificate that she had but in the recent weeks it was misplaced. No biggie to me but she did pay for it and wanted to use it. Instead we went to the Grand Hyatt anyways and laid by the lagoon for awhile. The property is gorgeous. The main entrance will take your breath away. It’s like you are looking at an ever-changing painting.

I have always had a fascination with hotels and considered getting into the industry, especially when you’re working for a property like this! Walking down towards the pool with a slide and running river and the lagoon, you pass its restaurant surrounded by a pond with koi fish.

Then we picked our beach chairs and relaxed. Well, tried to as there were preppy looking teenagers nearby that had mouths that belong to sailors. Eventually they moved away from us and then I relaxed as my cousin worked on getting a Car Fax for a Mazda they will be purchasing in Princeville the next day.

We were hungry. Since we weren’t guests at the Hyatt we couldn’t order anything so we went to a nice restaurant and sat outside on the deck and it was like being at a Trader Vic’srestaurant but actually somewhere tropical.  There was a koi pond, beautiful greenery, the ocean breeze and a tree across the street with incredibly vibrant red leaves. I ordered a cocktail that came in a pineapple and it was incredibly delicious. The ahi tuna tower was devoured and the sliders I ordered were Cousin Pablo’s favorite thing to order here.

After lunch, we walked around the shopping center. The first stop was a jewelry store. I like to get at least one piece of jewelry that originates from the destination to take home with me. That, and a magnet to put on my fridge. We stopped in clothing stores, kids stores, the general store and a place with knick knacks. I wanted to pick up a few things for family and friends back home. We stopped off at what I believe was the first surf shop in Kauai and it was right down the street from cousin’s house. I picked up a shirt for two of my favorite boys. We decided to go and pick up my nephew early from day care and hit up a pool. Of course, on the way there, it started to rain, and as usual, it eventually stopped but it was still warm.  The pool still seemed like a good idea.
We went to a hotel pool and there were pale tourists galore. The only native folks were the employees. We started off in the kiddie pool and Sol was no stranger to the water. He had colorful rings to fetch in the foot and a half deep circular pool and we sang Ring Around the Rosie, which I, apparently have forgotten the words to. My cousin eventually convinced him to go into the big pool and her new waterproof camera was coming with. He was not afraid of the water and even jumped and swam towards us over and over again. He didn’t panic or cry when he swallowed too much water. He is definitely my cousin’s son. As long as I can remember, my cousin was in the water. I remember traveling with her and the family to Fresno, CAfor swim practice and going to her swim meets. I remember keeping a UC SantaCruz course catalog because you can barely make out her head in a yellow swim cap when she did water polo for the school. But it was her! And I was proud of her.

We then went home to meet up with Pablo and head to Art Fridays in Hanapepe. It’s the cute art district that is said to have been the inspiration for Lilo & Stitch. Friends from the Bay Area, Dorian and Kat, and recent Kauairesidents also met up with us there. It was so good to see them! Shanti has always had such amazing friends.

There were food trucks, live music, delicious pies (with a Yelp check-in offer!), street vendors and of course the art galleries were open. When Pablo comes back to the Bay Area and visits with my grandparents, he is always wanting Los Panchosburritos in Pacheco, Ca. They had a taco truck at this event but he says it’s nothing close to what we have in the Bay. Outdoor seating and lighting was still being set up but we grabbed one of the first tables. I have to commend the man doing this set up with one arm. Good for him! After dinner, we walked up and down the street, ate our pies, picked flowers, played with Sol, shopped and checked out another art gallery. I found one piece that was really cool. It was called Liquid Jewel and went for $3,800. I’m glad it has a chance to be seen by other people because it won’t be hung up in my house anytime soon. 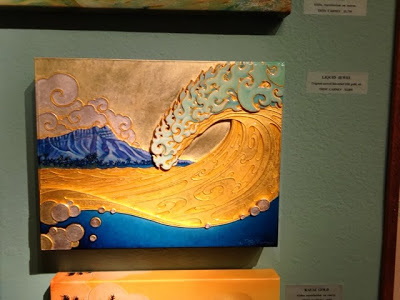