Over dinner in late June, my father and stepmom were talking about living on Maui and how every year for his birthday, they go to a restaurant called Longhi’s in Lahaina. When he stepped away, I asked if I could surprise him for his birthday. She said yes! I missed going to the islands the entire year of 2015 and just love it so much. I am just so happy there. And what better reason to go than to celebrate my father’s birthday.

I had a 7 am Hawaiian Airlines flight out of Oakland and grabbed a pricey breakfast at the airport of eggs, salsa, cheese, potatoes and apple sausage. It was ok but I had to eat something. I was lucky enough to have no one sit next to me. I slept through the entire flight until they fed us breakfast and welcomed us to Hawaii with a Koloa Rum punch and Maui Onion kettle chips. 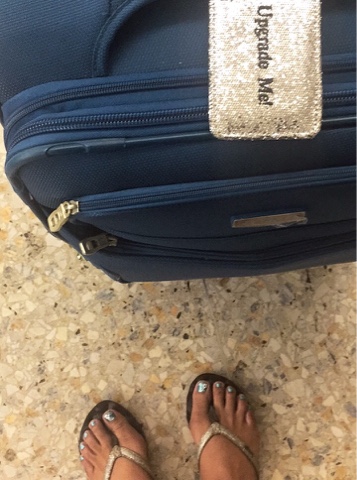 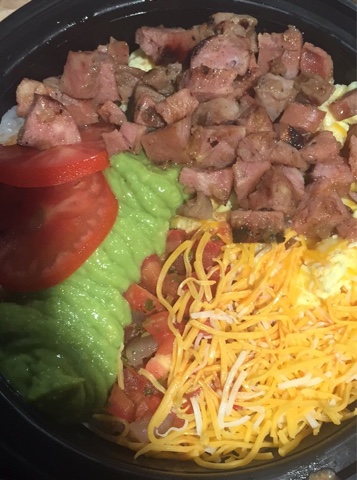 My plan was to pick up a six-pack of his favorite Bikini Blonde beer by Maui Brewing Company and some balloons tired to it. When he opens the front door, I’ll pop out. I also got a few stems of gladiolus for my step mom. My Kia Optima rental was full and I couldn’t see out my rear view mirror. But I was headed forward to Kaanapali.
I Periscoped (bappletree) from my rental car as I prepped for the surprise. Thanks to all that tuned in. But he didn’t end up coming to the door. My stepmom did and I came in and hid near the door in the foyer. He came out from one side of the house and saw the balloons, asked my stepmom who was here and he saw me. His face was stunned. Not exactly a big smile but not quite grasping why I was there. Happy Birthday! I gave him a big big. He kept asking why I was there.
After the shock, I moved my luggage into the gorgeous guest room with a walk in closet, large bathroom, private lanai and access to the backyard and pool. My stepmom came by assuring me that he’s happy and she said thank you. That was nice to hear. My father is a very private man and so I wasn’t exactly sure how he was going to take it but he was happy I was there.
I had lunch with them. My stepmom made good and healthy items for us. We chatted for about an hour and it was nap time for him. That’s when I went back to work on the patio with a view of the pool and the breeze to keep me cool.

Papa came out and said he was happy that I was there. He had a big smile and it almost made me tear up! Then it was time for happy hour.
We went to Pi Artisan Pizzeria and had ‘the coldest beer on the island‘ according to my father. He ordered his Bikini Blonde while I had the IPA (see August beer log). We had the prosciutto pizza which was delicious! The garlic knots which I loved served with some marinara sauce I didn’t partake of. The meatballs were good too. And I had to have a salad. It can’t be all carbs. The owner came by and introduced himself. He confirmed that my stepmom booked a reservation on OpenTable so she got her 100 points. She writes reviews on Zagat. My Papa writes reviews on TripAdvisor. A cute local that worked there also came by to check on us. He called Papa ‘Uncle’ as they do as a sign of respect. 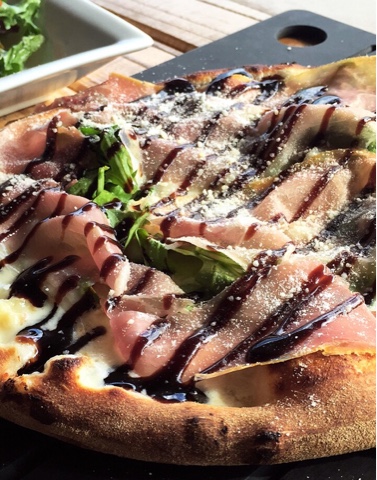 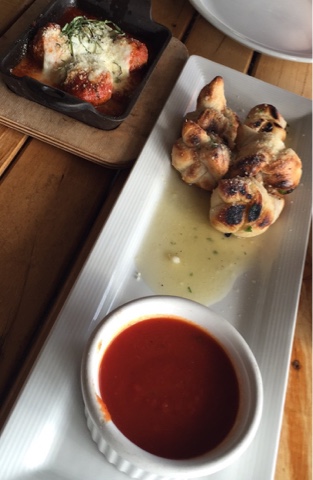 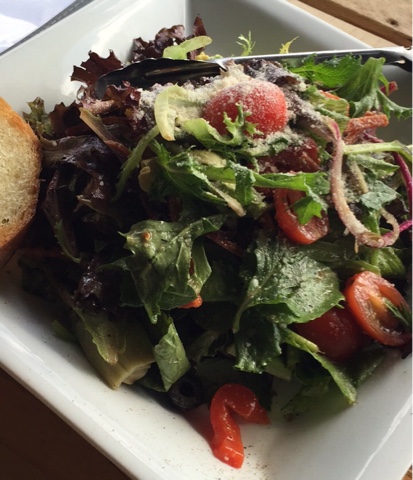 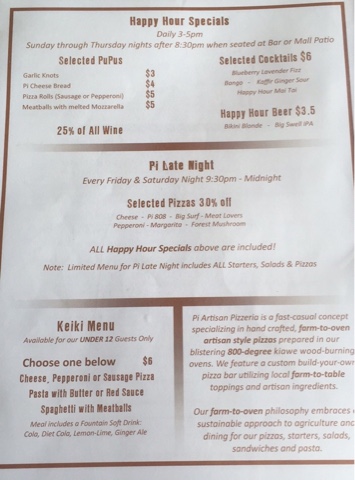 The view was awesome. You just can’t beat that. We walked along that stone wall when we had dinner at Longhi’s two years before. It must be close. 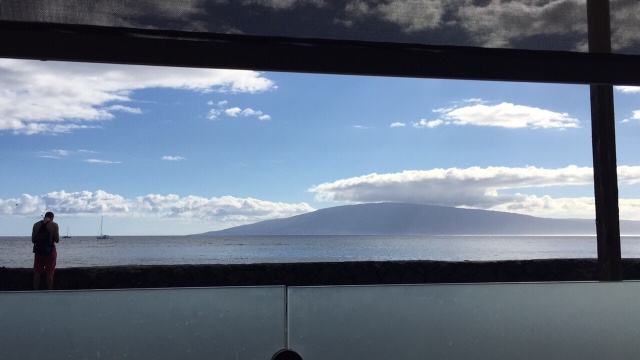 We then walked along the Outlet Shops and it was pretty dead for a Friday night. I wasn’t there to shop. Except for cookies that Nelson requested. I asked him, ‘Which ones do you want?’

The area is just so beautiful. Look at these handing flowers from the tree near the parking garage. Beauty is everywhere.

Then we just went back to the house and chit chatted on the deck in lawn chairs. He again said he was happy I was there. It was definitely miles well spent. Thanks, Hawaiian Airlines. I feel like an adult. I went to bed around 9:30 pm. It was past midnight California time.
Day 2