Skip to content
Asians aren’t known for their rear ends. Trust me, I know! But China Live would be lacking if they didn’t have their Char Siu BBQ Pork ‘Dutch Crunch’ Baked Buns. It’d be like Sir Mix-A-Lot without ‘Baby Got Back.’ But praise Jesus! They do!
Like the recent visit to Curio, Concierges were offered a credit to try out China Live. I send a whole bunch of folks to this restaurant on Broadway in San Francisco and am so happy to have had the opportunity to stuff my face with their delicious offerings. Again, I took my foodie #Instafriend, Julia. She has been to China Live before and was so excited to go even though her stomach wasn’t 100%. That makes it very clear to me that this restaurant is quite spectacular.
I arrived from the East Bay via Bart and partially went thru Chinatown where you’ll see the red lanterns hanging across the streets, the jewelry stores with a lot of gold, cheap San Francisco t-shirts and groceries including jujubeans. The doors I came into the restaurant lead me to believe it was a retail store but then I saw the host stand. I checked in and was escorted down the steps, seeing the variety of items in the store, past the bar and grabbed my #Instafriend that came in thru another entrance. We had a corner table and instantly eyed the dishes of the two gentlemen sitting next to us. We were famished. 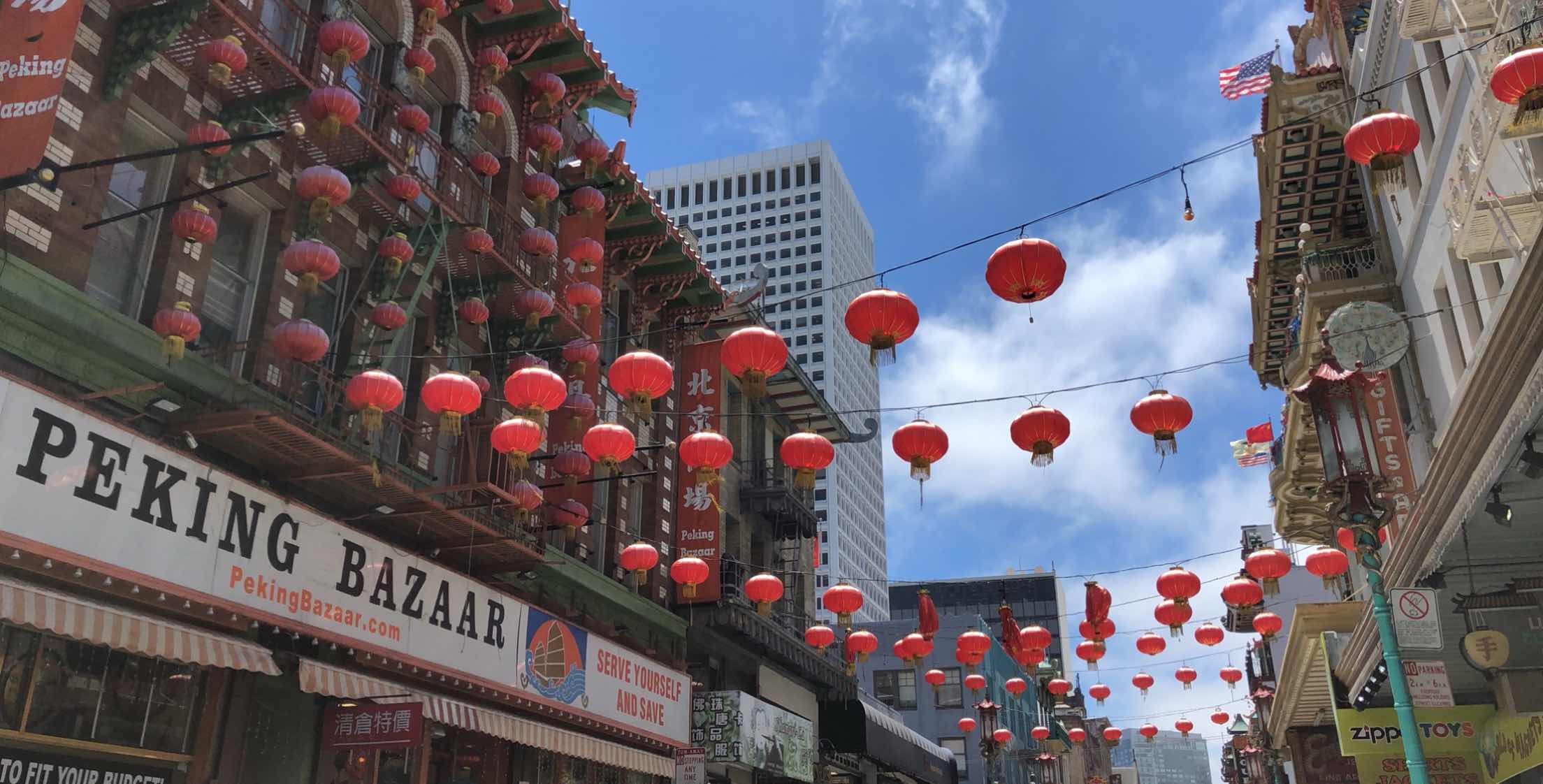 Hugs to seeing each other again twice in one week and it not being Meatless Monday and then we got to business. What are we going to eat? Everything looked amazing and I was down to try anything, especially since Julia has been there before. However, she noticed that there was a lot of different items on the menu since she was here last. Repeat orders for her were the Char Siu BBQ pork buns already mentioned and the Charred Chinese Broccoli with King Oyster Mushrooms and Roasted Sesame. I love vegetables so the broccoli aka ‘Little trees’ as I call them were great. 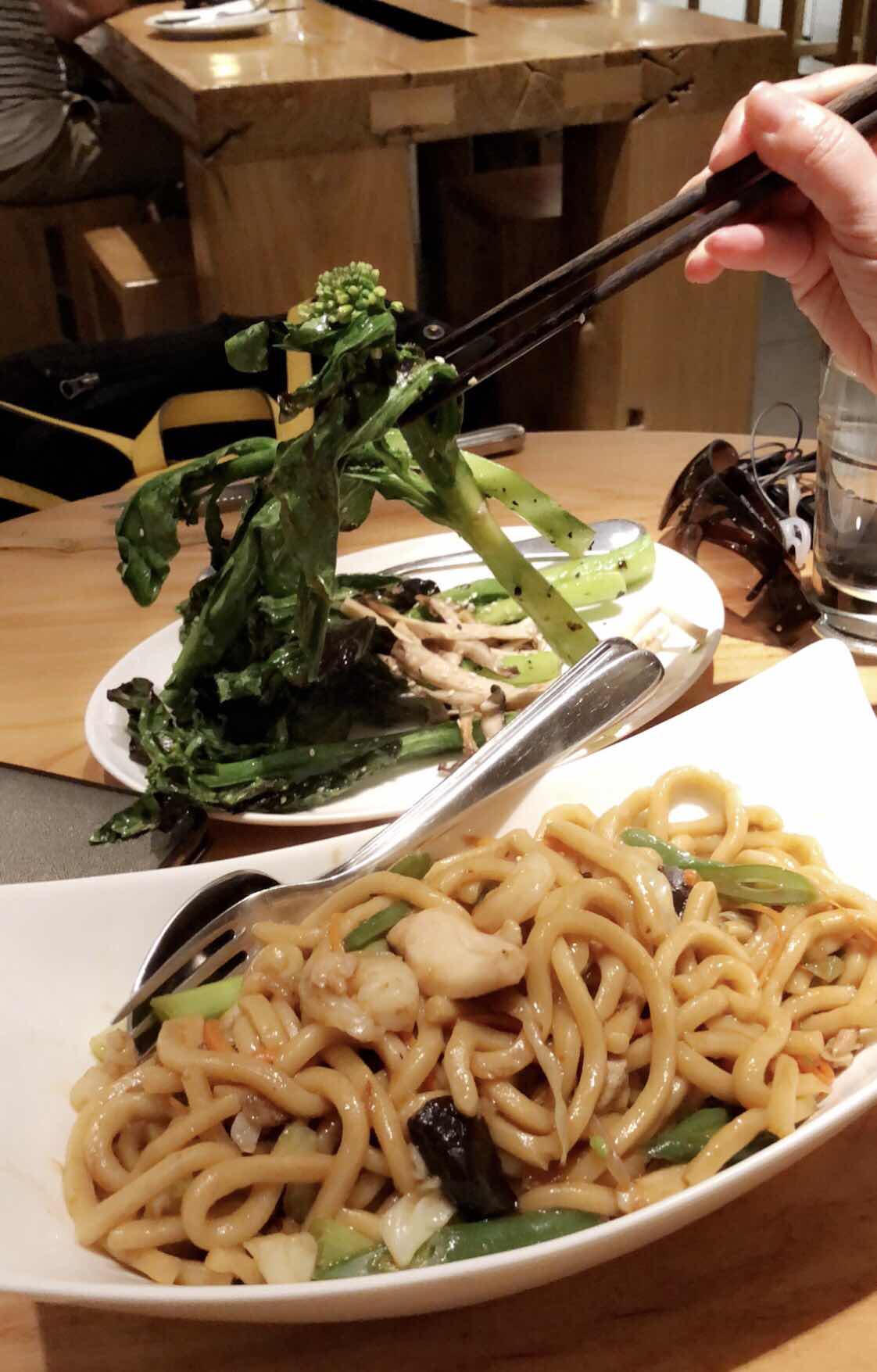 Other small plates that we enjoyed were the Peking Duck, Kumquat Glaze, Traditional Condiments in a Sesame Pocket and the Shiang Jian Boa ‘SJB’ (Pan-Fried Dumplings) with a hot and juicy inside. Duck isn’t my favorite but these pockets were incredible, crispy and not too fatty. A lot of flavor was in that duck. The SJB was best with the dark vinegar that was on the table. 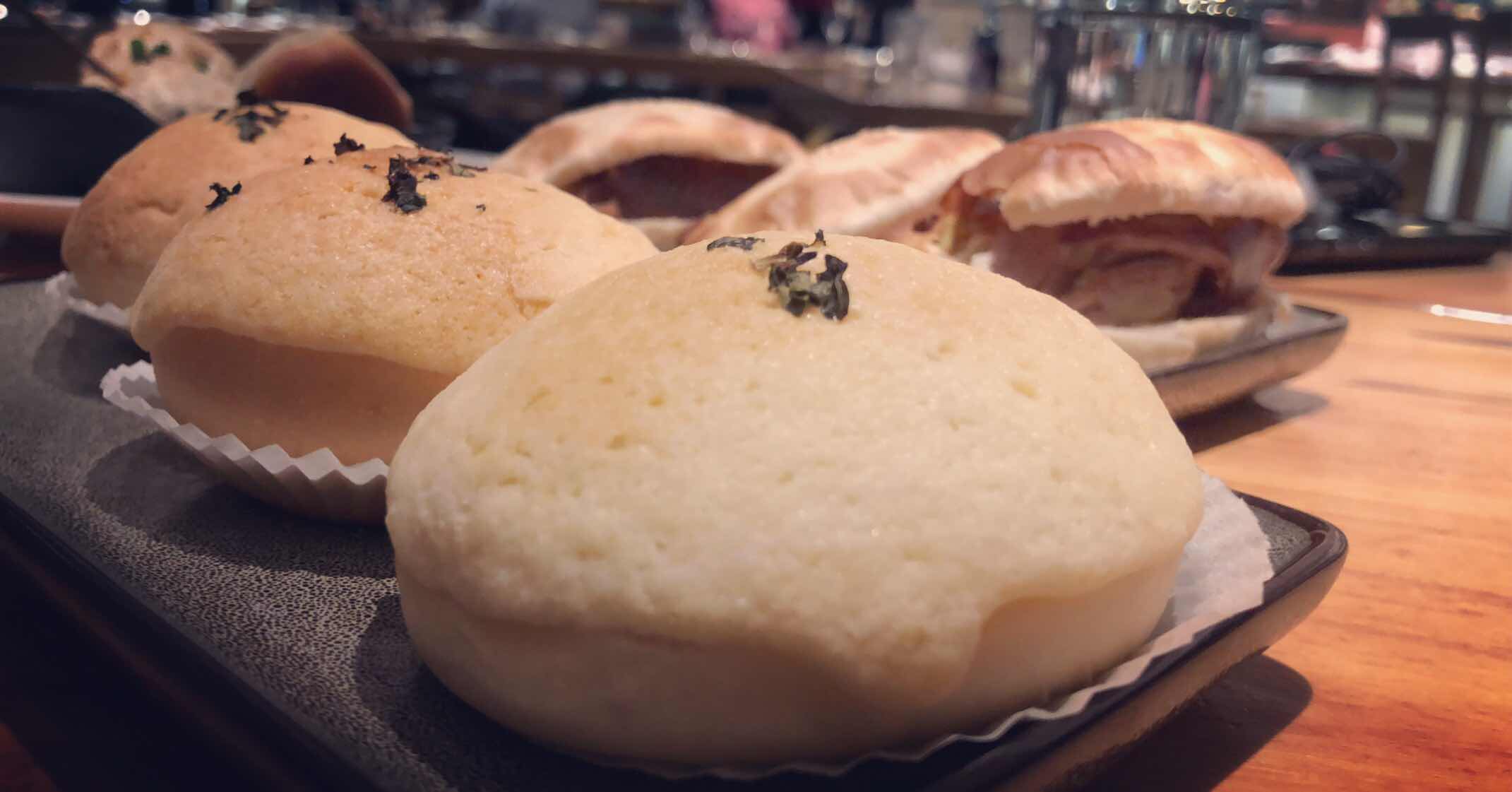 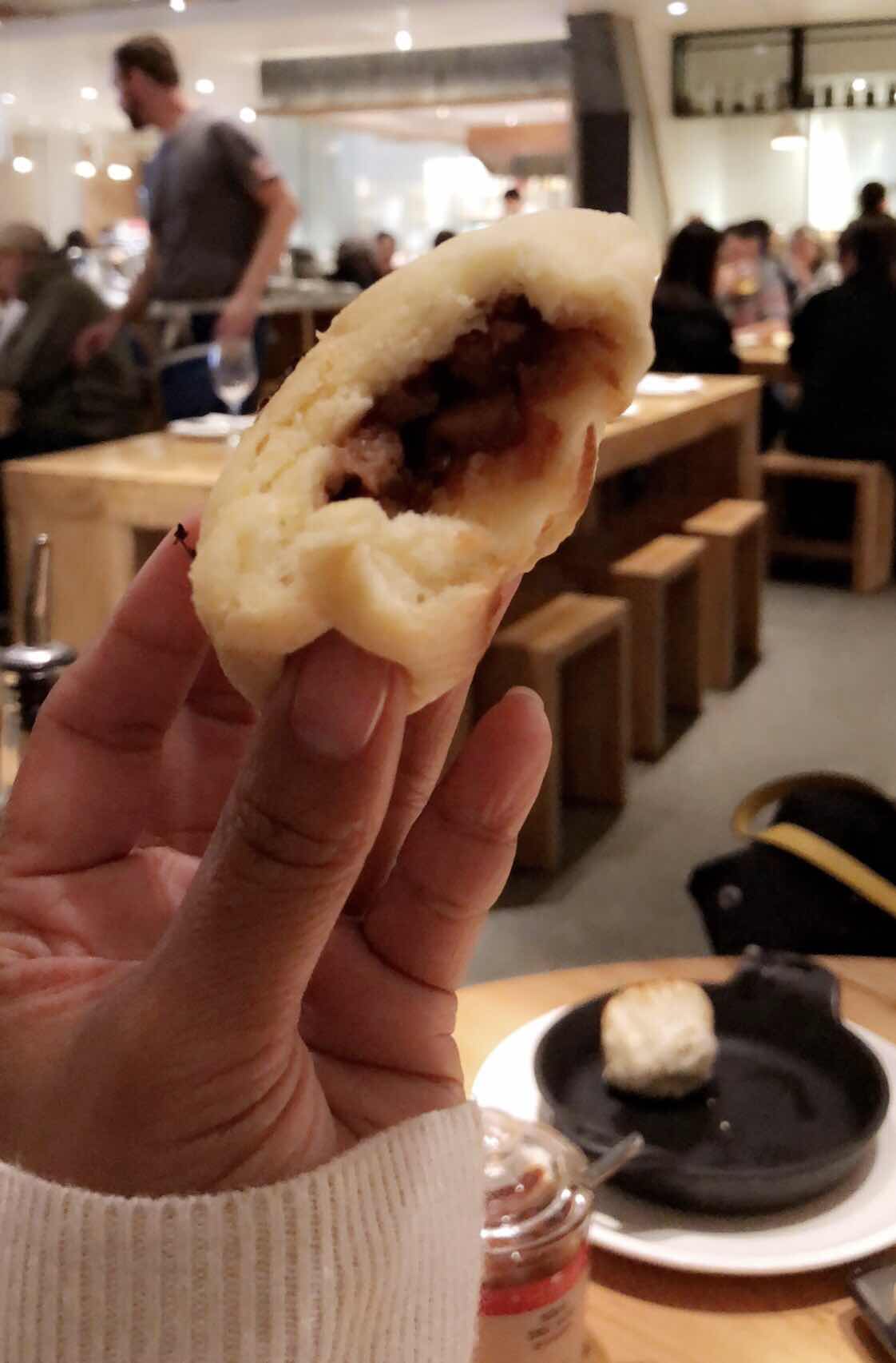 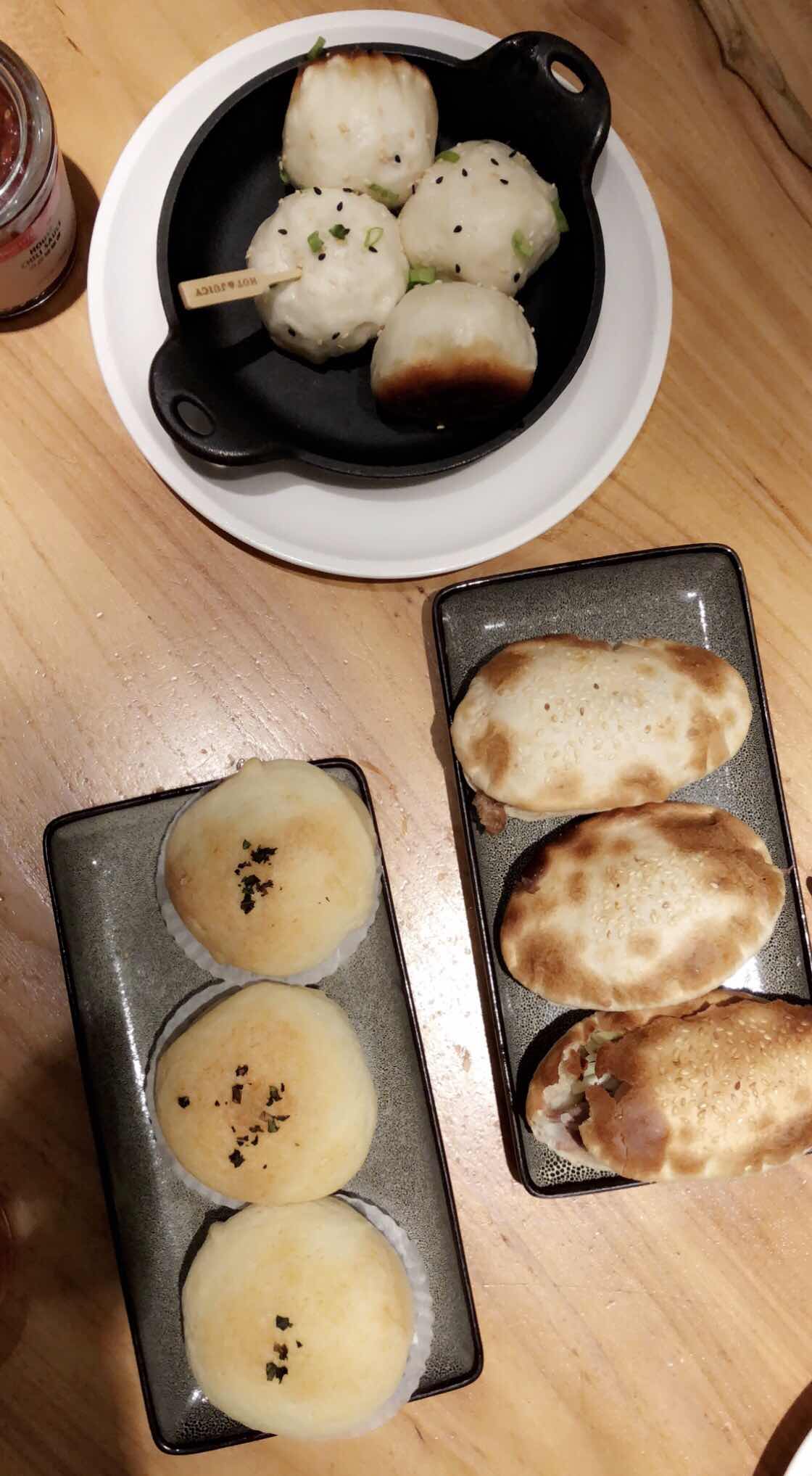 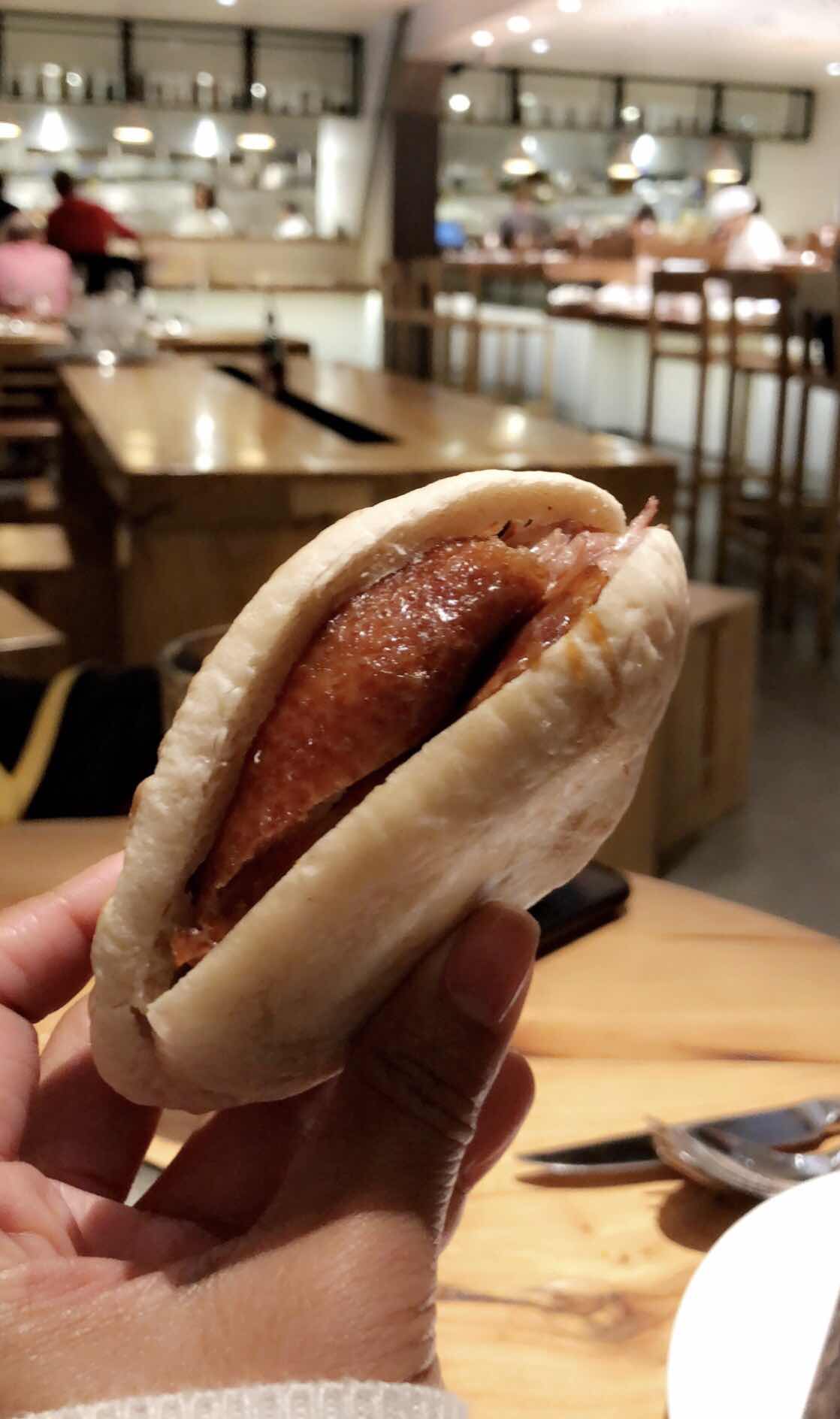 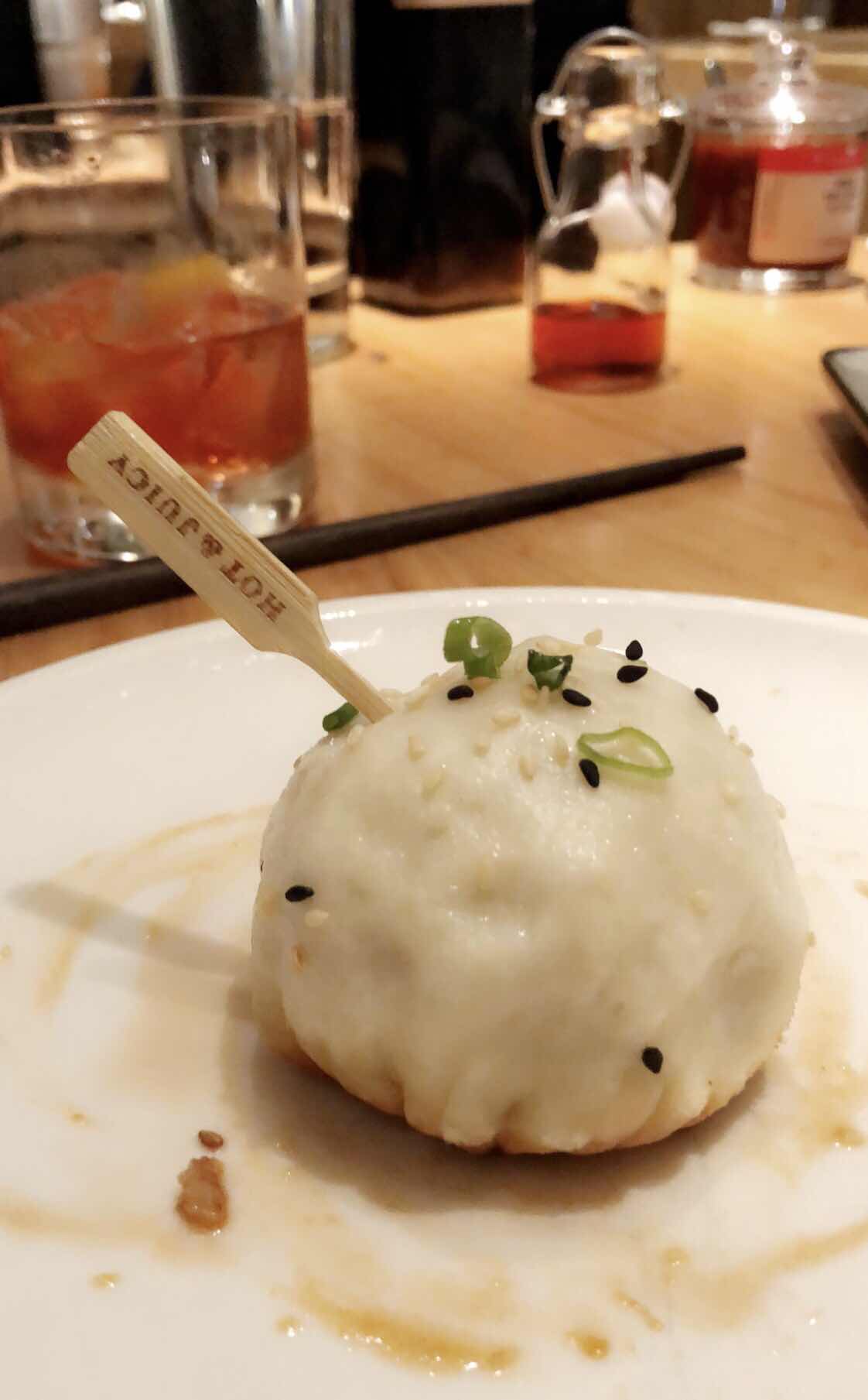 Oh, and our drinks! They arrived and captured our attention for some time! Julia had the Sweet and Sour Mischief that came in a tall glass shaped like a barrel. It had Sichuan Peppercorn infused Cazadores Blanco Tequila, Fresh Lime and Pineapple, Honey and Almond Syrup. It was pretty potent and not too sweet. My drink came half made with a rock glass with a few pieces of ice, clear liquid and a mini-glass water bottle with a stopper with the good stuff. It was called the Szechuan Starlet with barrel aged black tea infused Angel’s Envy Bourbon, Cardamaro Amara, Campari, Szechuan Peppercorn Bitters and a splash of Bubbles. Did you say Bubbles?!? Hence, the attention. 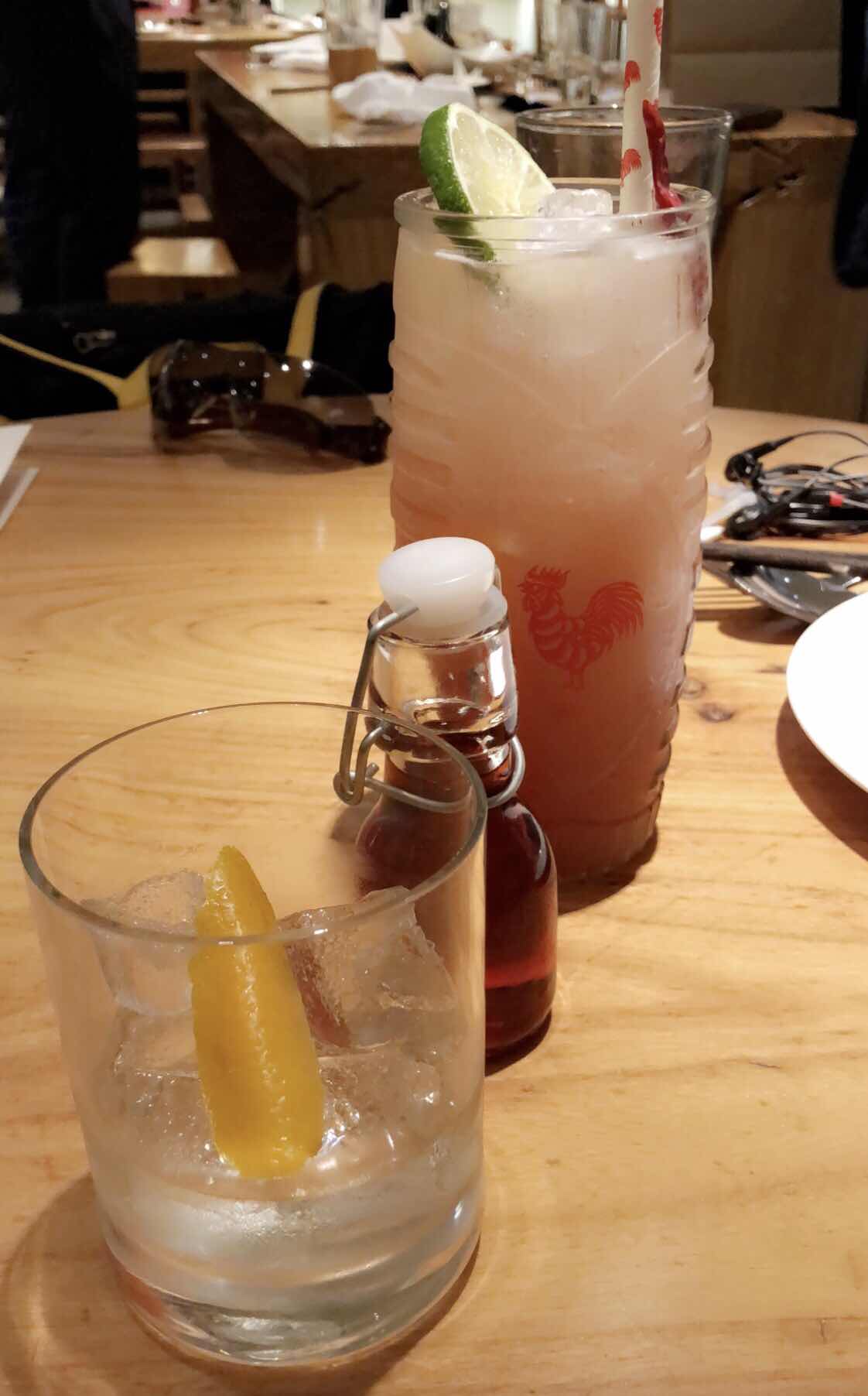 We couldn’t part without dessert. We like to share everything. We went with the Coconut Rice Pudding with passionfruit boba and candied ginger. It was light fantastic. Coconut has been a recent favorite of mine since Plated had me make coconut rice. I will never eat just plain rice again! The dessert was a small portion, only because we both wanted more of it. The boba popped in your mouth and this non-ginger-lover didn’t mind the topping. 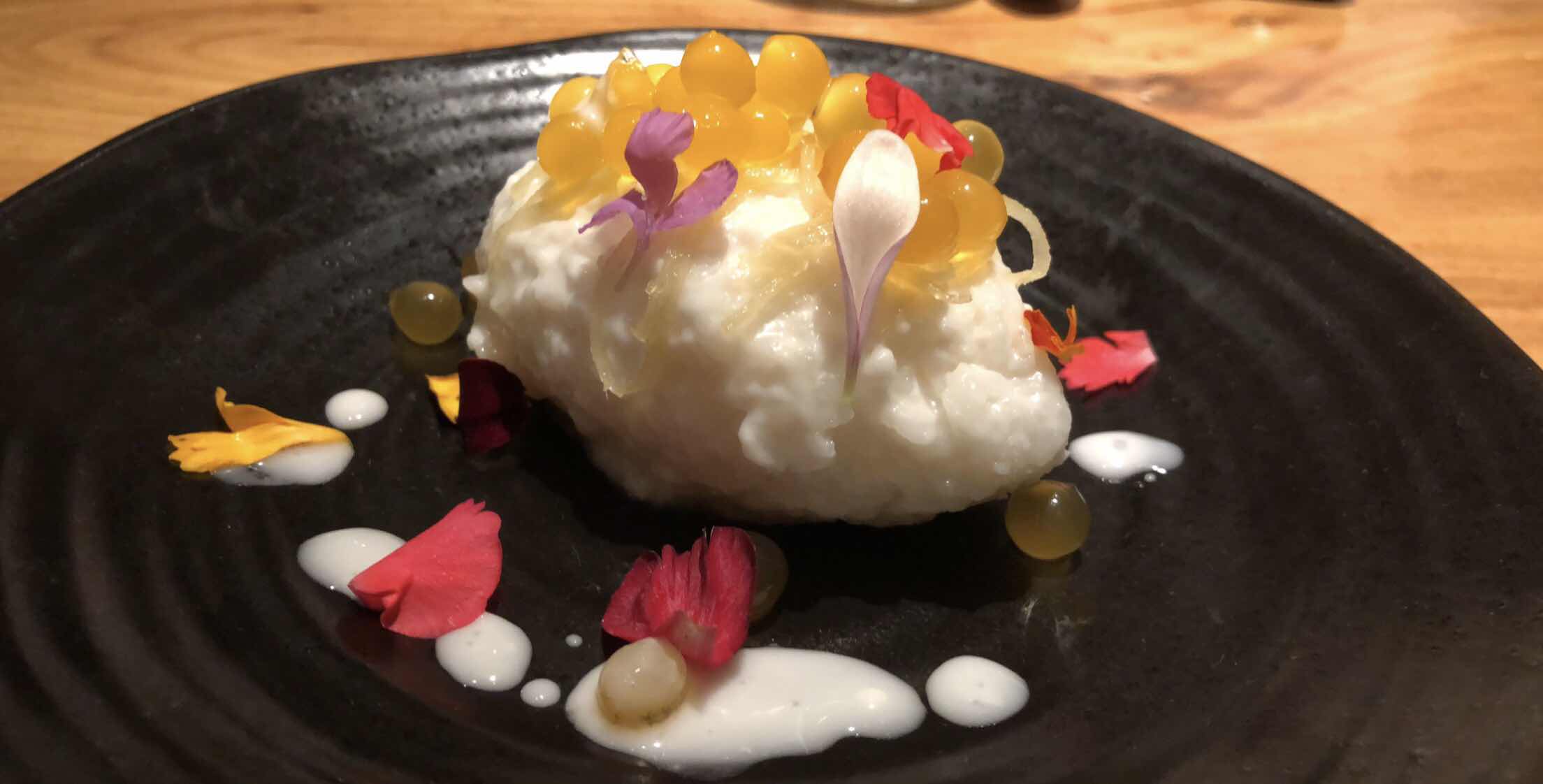 Since going to China Live about a week ago, I have been telling all of my hotel guests to go there and in the most charming way possible, saying how much I love them if they’d bring me an order of pork buns. Sadly, no doggie bag has come my way. I guess that just means having to go back soon! Let’s go!
SF Eater – Your Guide to China Live, Chinatown’s NewEmporium to Food & Drink (Feb. 17, 2017) 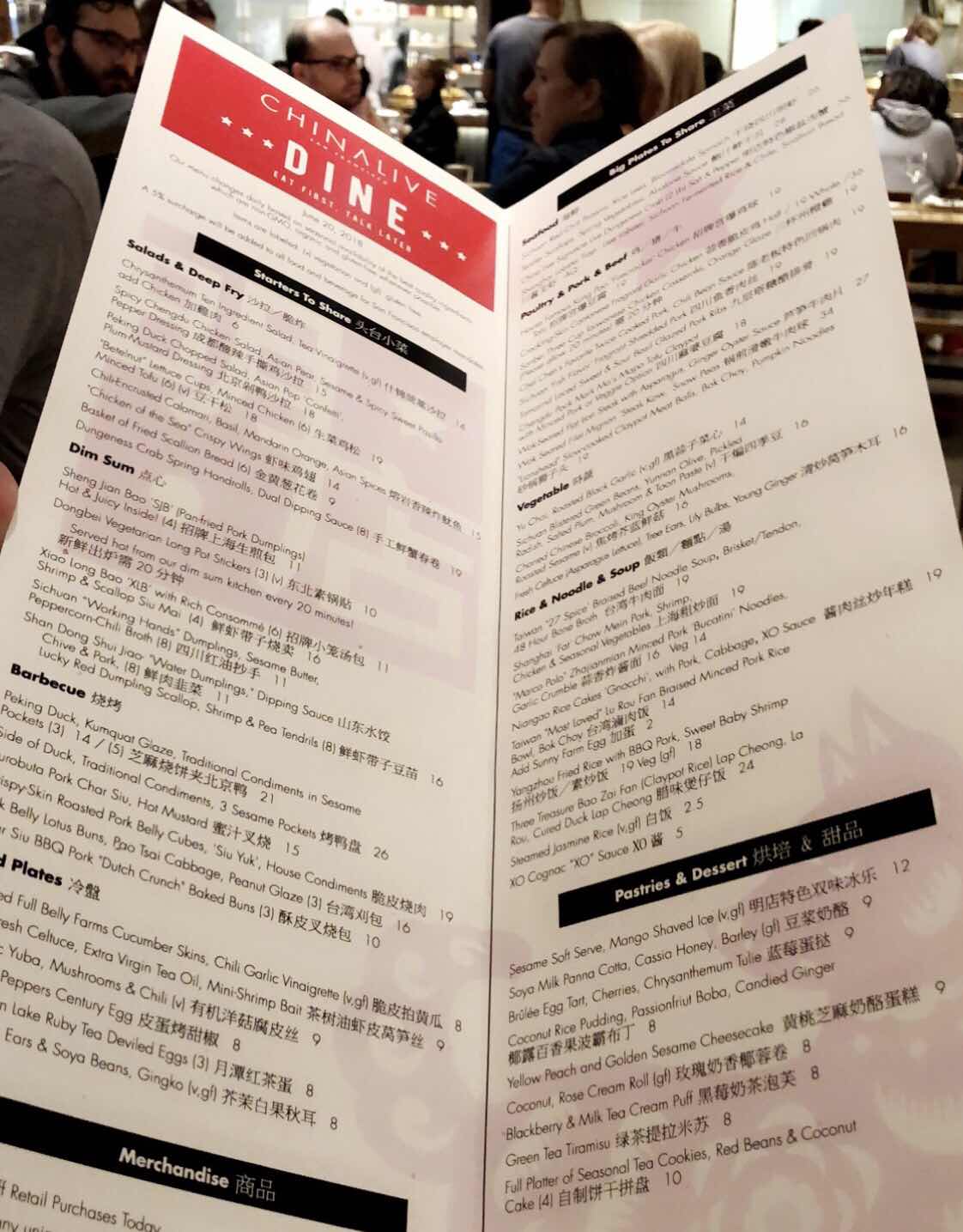 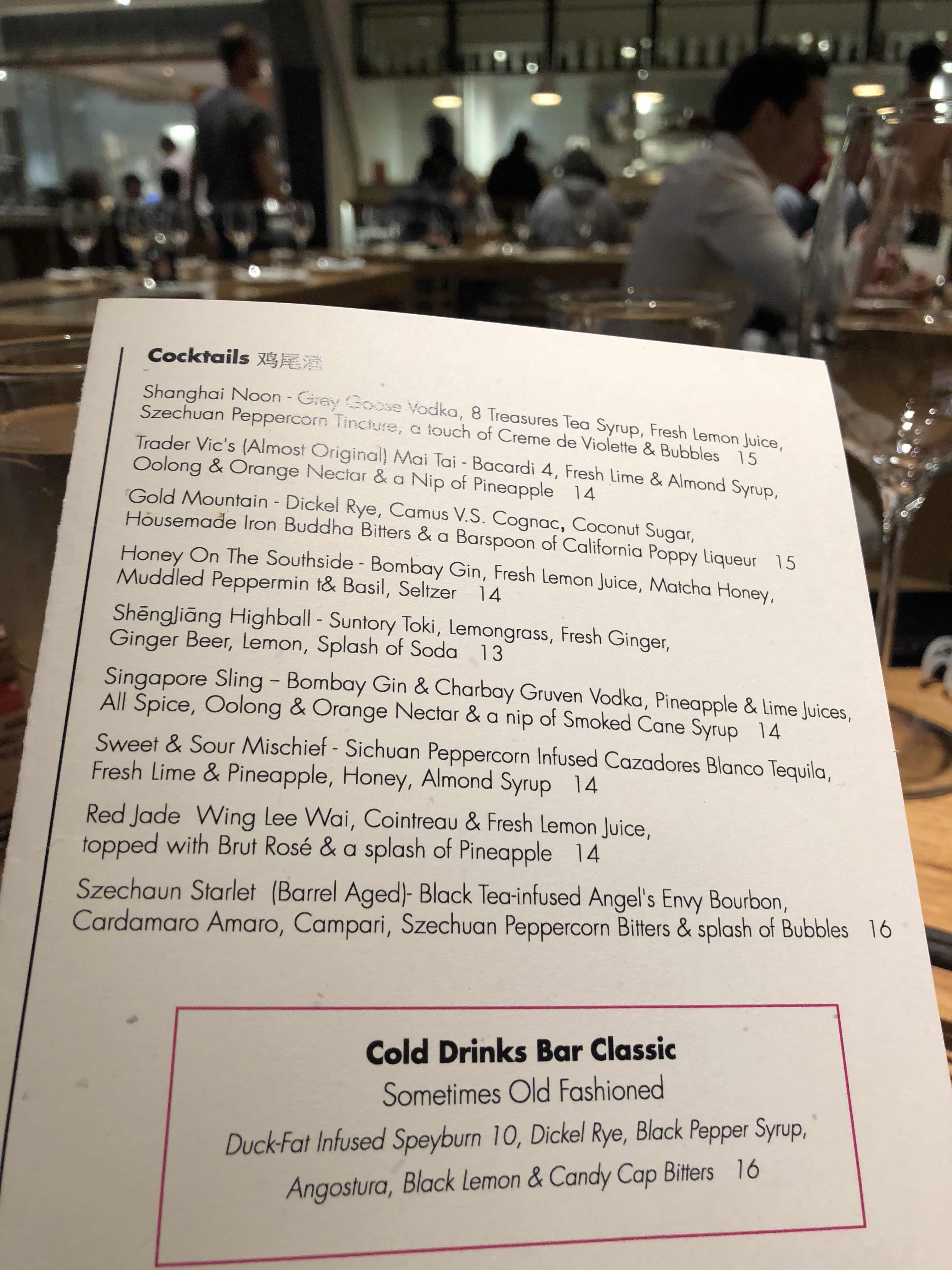