The Bay Area is crazy about the Warriors, Stephan Curry, his daughter, Riley, that would steal the show during his interviews and his beautiful wife, Ayesha. Mrs. Curry is out with a cookbook and a restaurant partnered with Chef Michael Mina. After being in the south and enjoying BBQ in Charleston, South Carolina at Poogan’s Smokehouse, I had to come back home to see how we compete. Actually, my reservation at International Smoke was made at least a month in advance as it’s a popular spot.

I made a reservation for four not knowing who would be able to make it but I know a lot of foodies and folks in the industry. I could fill my reservation no problem, and I did! I invited my roommate, my Team inTraining team made, Nelly, and our friend, Sandra, who was diagnosed with Hodgekin’s lymphoma. Nelly is also a BBQ fan and does catering for friends and Raider games on the side.
The four of us were coming from all directions – I was coming from work at the Argonaut Hotel at Fisherman’s Wharf, Sandra was coming the peninsula, Nelly via boat from Alameda and Kim from our house in Hayward. Regardless of how we got there, we arrived and were ready to eat and drink.
We met at the bar first and had delicious cocktail made by a tall lady named Elizabeth. Under the list of Boozy & Bougie, I had the Southern Charm  – $14 – (as I can’t stop thinking about my recent trip to the South). It was peach-spiced tea, lemon, mint and Wild Turkey Bourbon. You know I love my whiskey! Kim chose a winner with the Voice of Tansen  – $14 – with pineapple, tamarind, Suntory Whisky Toki (mmmm, Japanese whisky) and Averna Amaro. It was so good that Nelly chose that after trying all three of the ladies’ cocktails. Sandra had the Gina Jamaica – $14 – with cucumber, basil, grapefruit, Ketal One Vodka and Barsol Pisco. I don’t do vodka cocktails as I need a bit of flavor in my liquor but Sandra enjoyed it. I thought it could be a dangerous cocktail as it went down easy for me. In our cocktails, Kim and I broke in our metal straws that we purchased from Shed in Healdsburg the day before. Save a honu! The Hawaiian bartender behind the bar agreed! 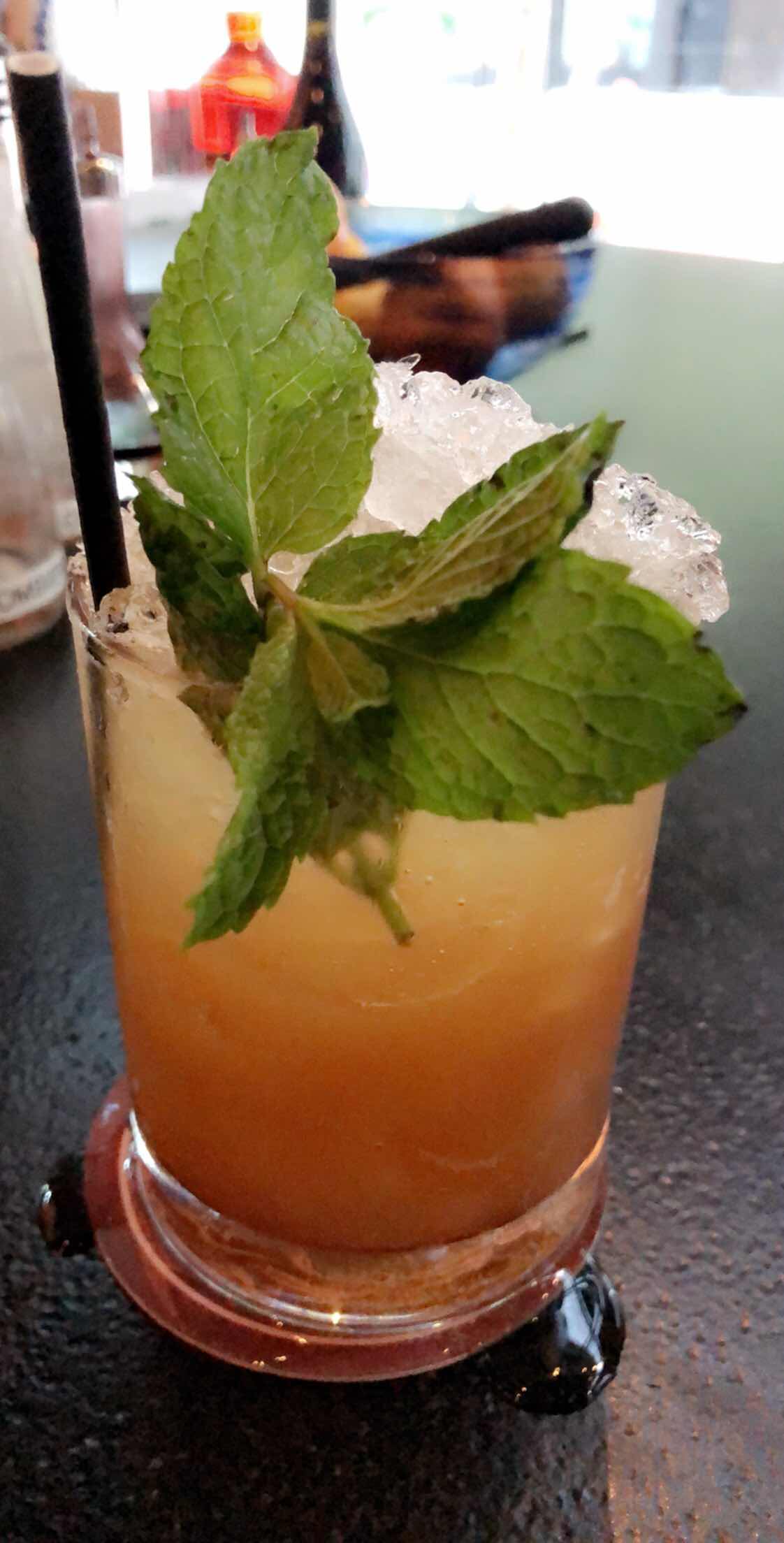 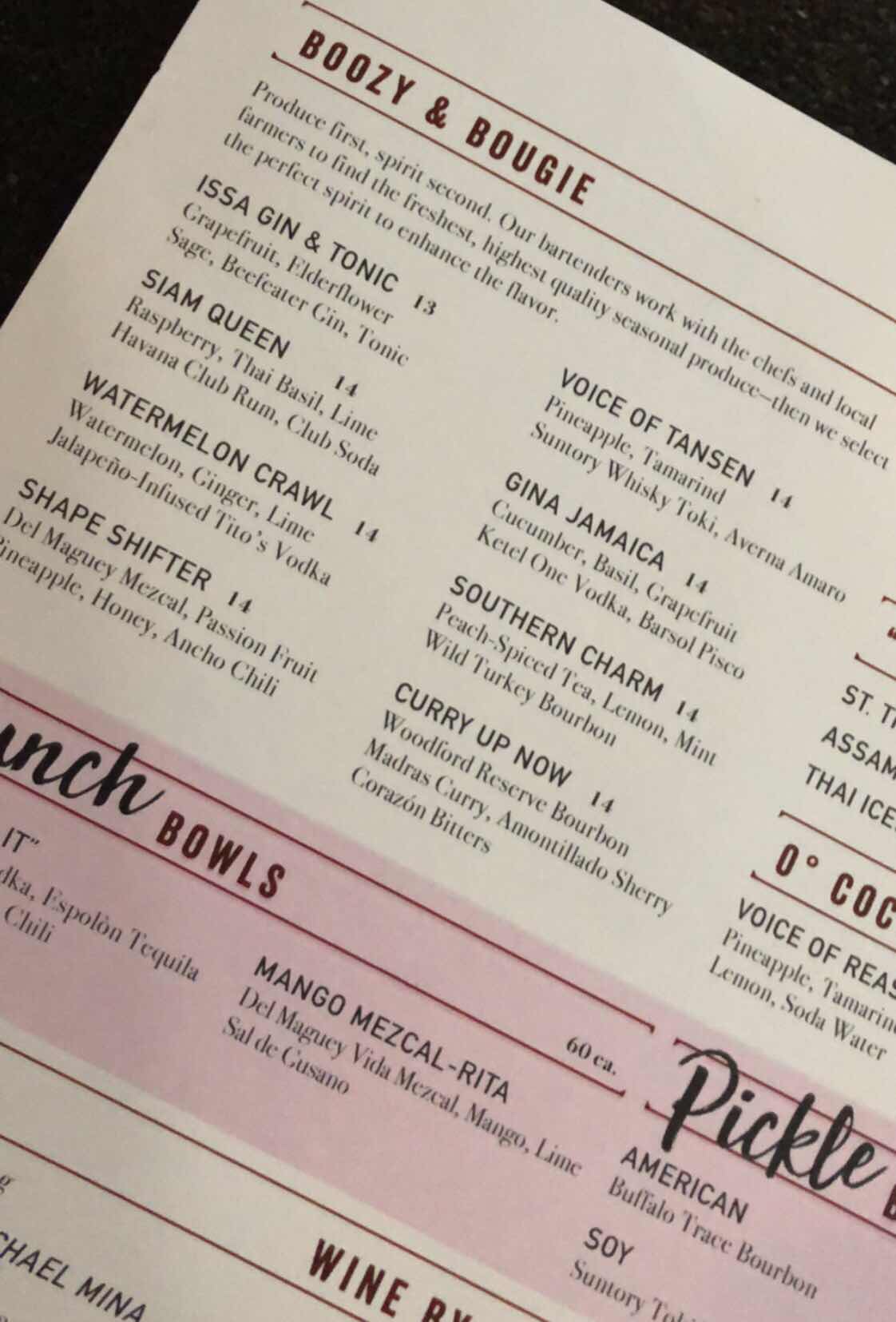 We were sat at the other end of the restaurant at a table for four in the middle of the dining room. Wood was all around, simple lighting hung from the dark ceiling and the floor to ceiling windows let a lot of light in. We were greeted by Bianca, our friendly and smiley Server, and she explained the Ayesha’s Tasting Menu ($58/pp) in front of us. Unfortunately, the entire table needed to participate so I didn’t get to try it but it had a bit of everything. Kim mentioned she’s allergic to tomatoes so Bianca made sure to let her know which items she can have or modify. I asked her what her favorite items on the menu were and she mentioned the Smoked Rib Mac & Cheese, Kalua “Instant Bacon” and Wagyu Shaking Beef. We started out with the Instant Bacon and the M&C came with the rest of our food. 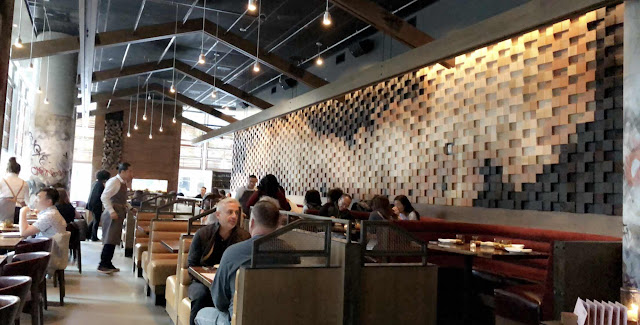 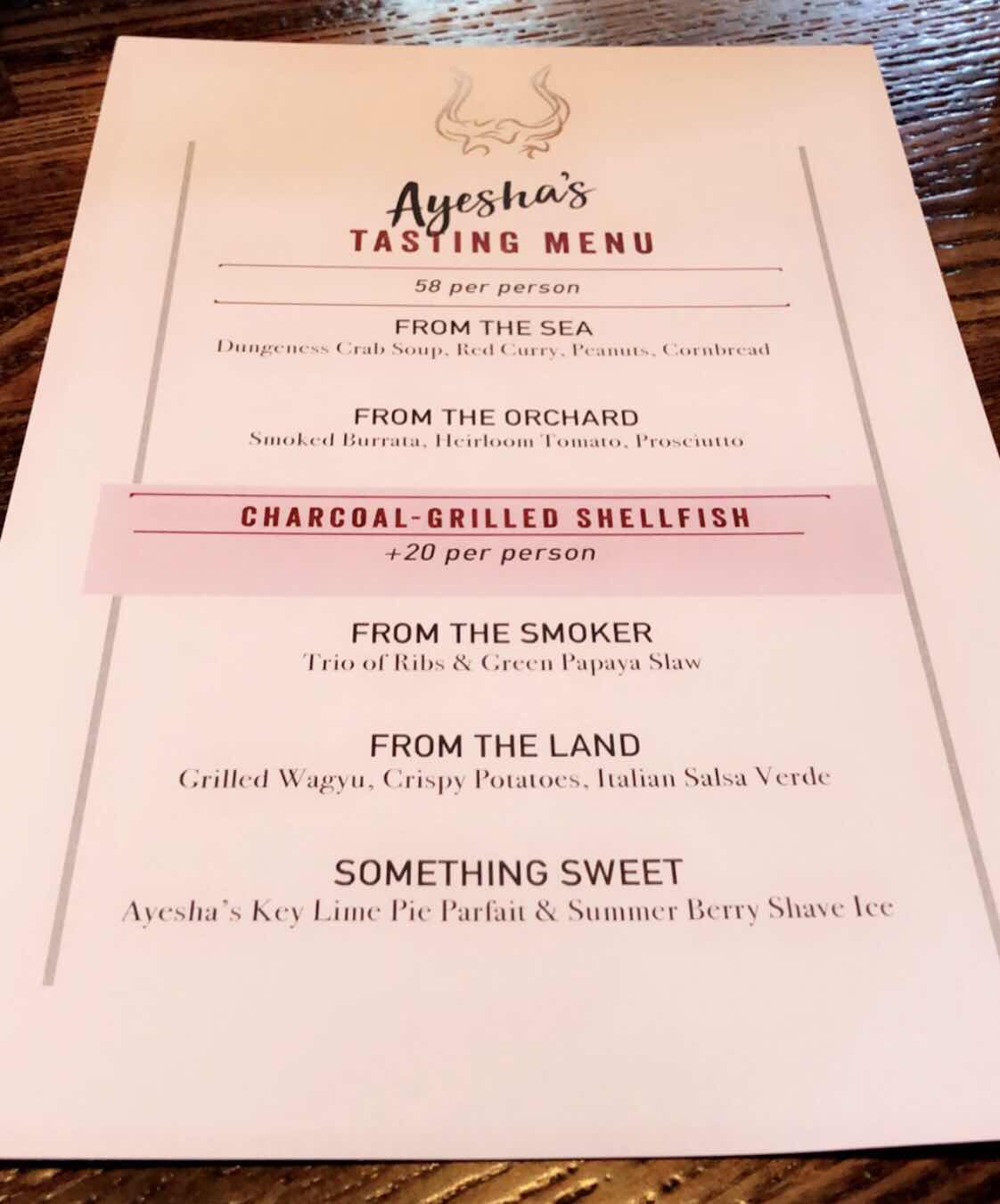 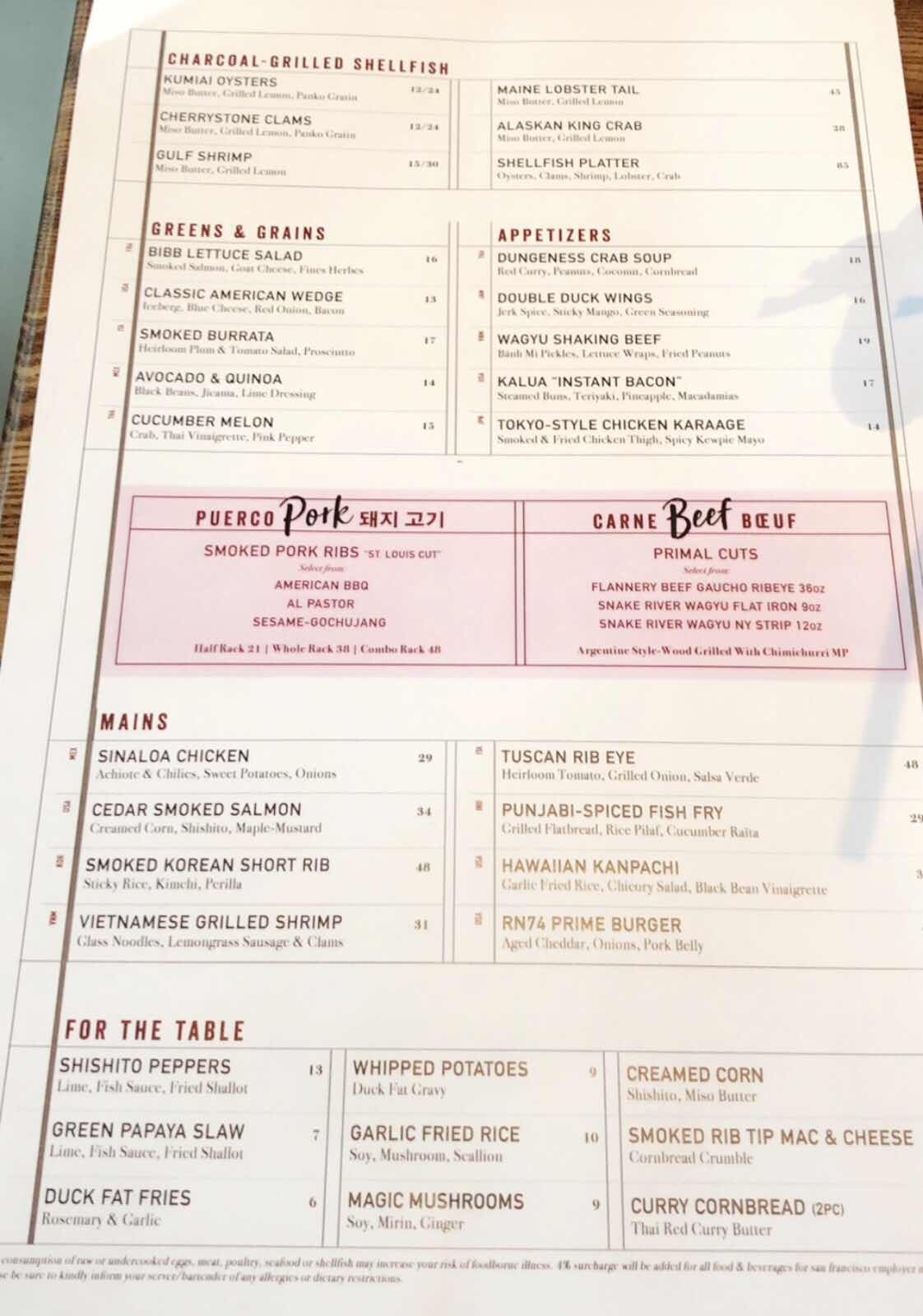 Boy, does that bacon make an entrance! Servers brought two orders covered in a glass dome then, when our phones were ready for that action shot, they were lifted. Smoke was released. How perfect for the International Smoke. And not to mention it was damn good too. In a soft steamed bun, bacon was covered with teriyaki, pineapple and macadamia nuts. We almost licked the

Not being able to choose which of the three rib styles we wanted (American, Al-Pastor or Sesame Cochujang), Nelly and I decided to split a combo rack for $48. Sandra had the American style half rack of ribs, I believe. It looked like the size of our combo rack for $21. What a deal! My favorite was the American and Nelly let me take those leftovers home. We dined on a Sunday and after Meatless Monday, I had them for breakfast on Tuesday. Don’t judge me. Kim had the Hawaiian Kanpachi with garlic fried rice, a chicory salad and black bean vinaigrette. I wasn’t too crazy about her dish. Perhaps it was because I had the rare presence of delicious ribs in front of me. 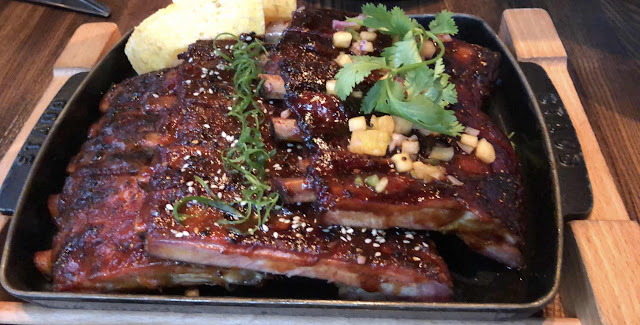 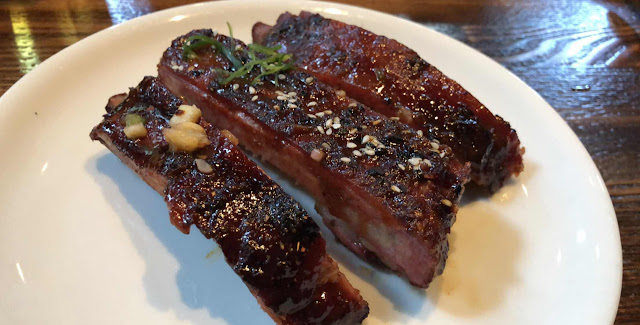 The winner at the table was definitely the Smoked Rib Mac & Cheese. Kim and I even went to the Mac & Cheese Melt Off at SparkSocial SOMA (South of Market neighborhood.) That event deserves another blog post. This dish was fantastic! We ate it all! Not a bit was left. It was better than anything we had at the Melt Off. The cheese wasn’t too thick or too runny. The spiral noodles were al dente and the rib pieces were flavorful and didn’t add too much oil. 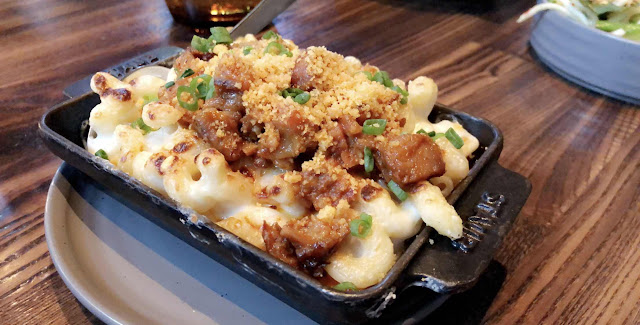 We also had the Duck Fat Fries that Sandra said I would be all over. They looked appealing on the menu but the flavor didn’t come out in the fries. It was the only thing we left on the table that didn’t make it in a to go bag. The Green Papaya Salad was good. I finished it off as the table wasn’t too crazy about it. It needed a bit more spice
to it and though the papaya had a crispiness to it, some of the crushed macadamia nuts or peanuts could have been added to add a dryness to it. 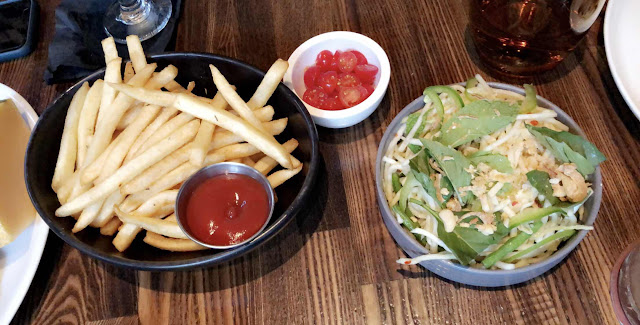 Plates were cleared, Nelly and Bernie bags were made and we looked over the dessert menu. They had creme brulee and a cheesecake, I believe, but we passed. We were happily stuffed! 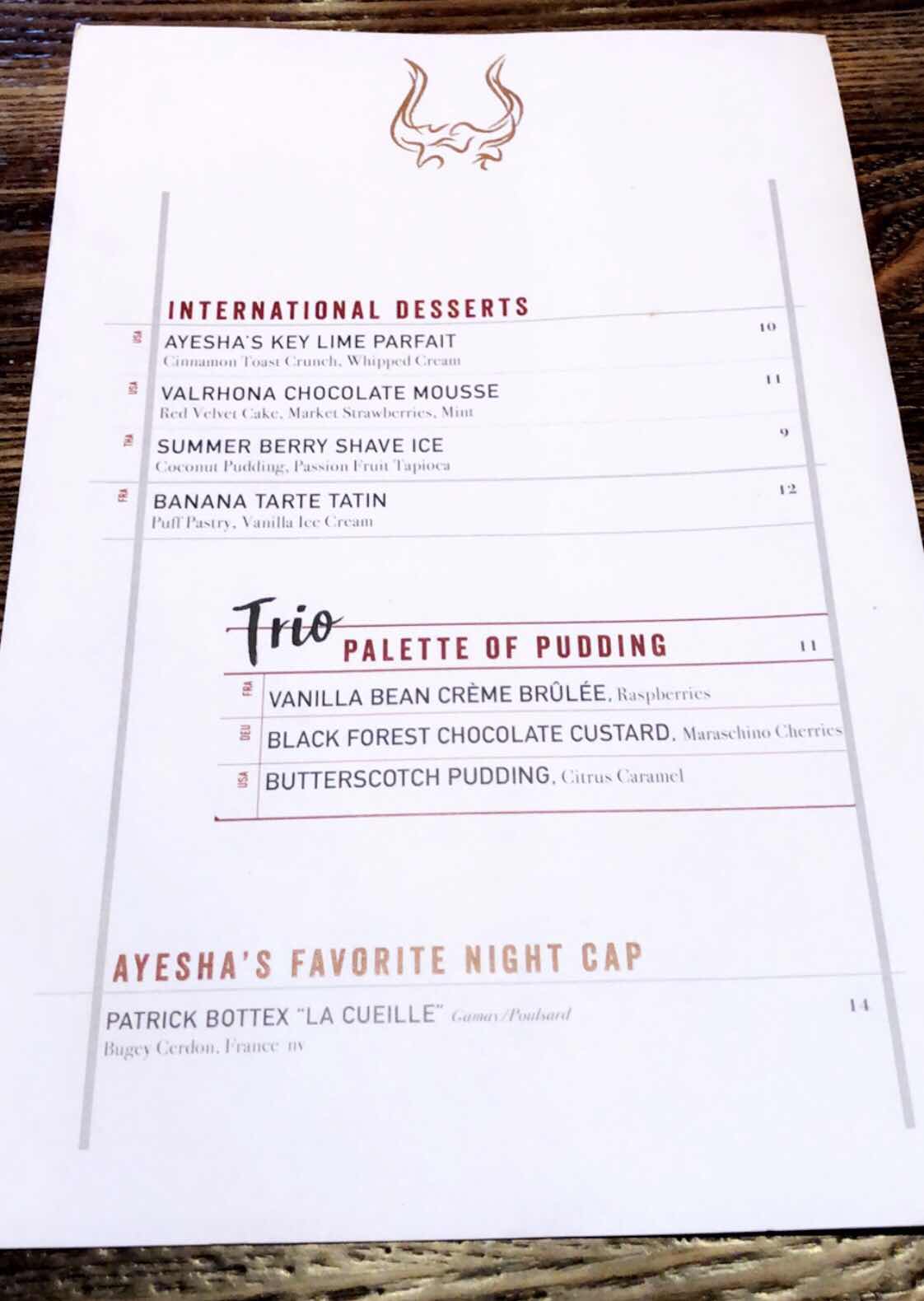 The staff was incredibly friendly,they do private events and Ayesha’s book is on the display. You may eat at the bar if you do not have reservations and there is availability. Find parking on the street of use my SpotHero link for $7 off your first parking reservation. If you’re too early for your reservation, walk a block and explore the rooftop of the Salesforce Transit Center. Yet another post will be available soon. But first, some group shots. 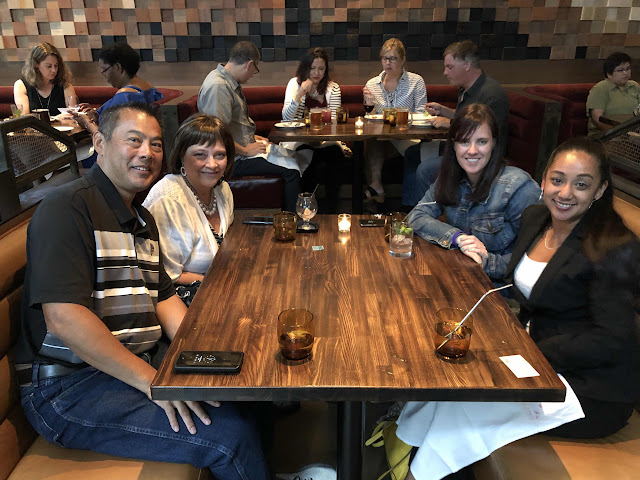 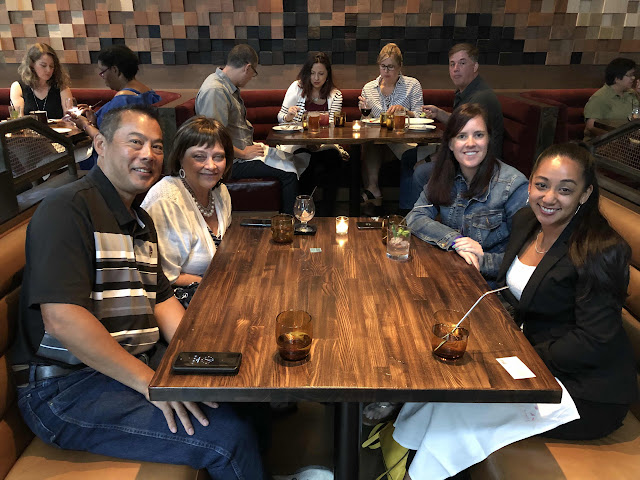 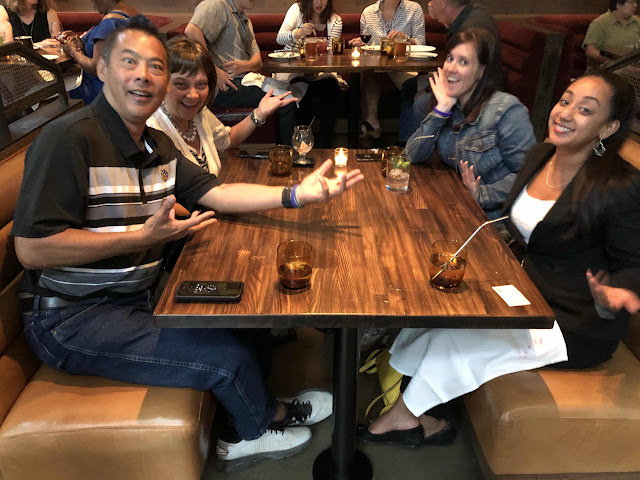 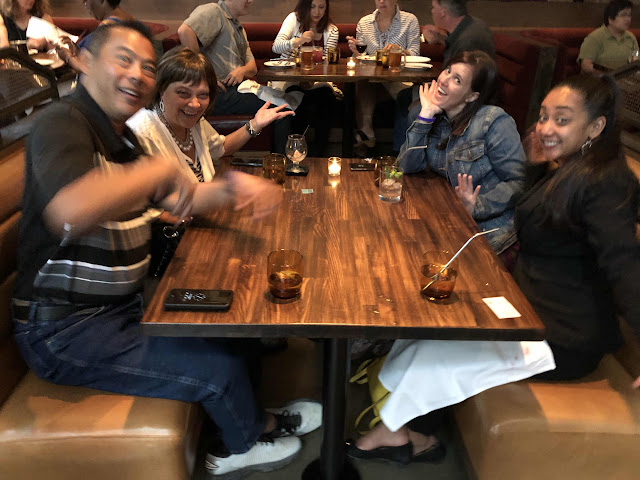 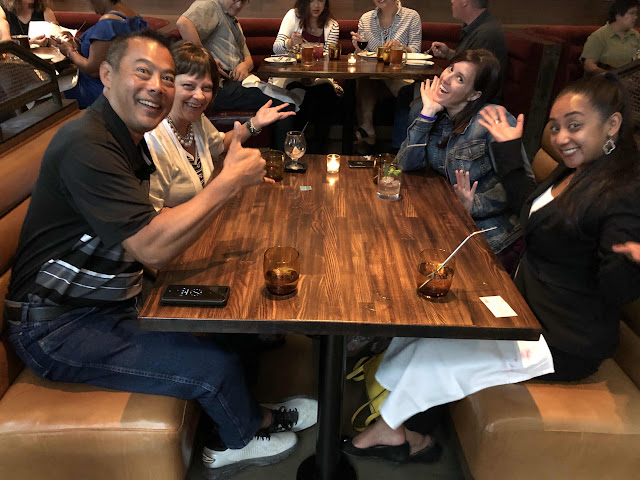 How does it compare it to Poogan’s in Charleston, South Carolina? I guess you’ll have to read that blog post when it’s up!
Related posts:
Tex Wasabi’s

One thought on “Curry & BBQ”