Like some that want a sandwich after a good sesh in the sheets, post free cuddles (a previous post) will make you want you to go to Snug(gle) and continue having your senses overloaded again on Fillmore Street in San Francisco. It just makes sense. Or did I lose you?

Puppy love – Check! Then a corner bar catches your attention with their windows open and it looked like it was really happening inside. “You want a drink?” It was 5 o’clock somewhere and lucky for us, it was so presently in San Francisco. Not like it matters. Someone is down for anything.
I gave the respect of asking the Hostess if we could sit at the bar instead of walking straight there and she smiled in the direction we should be headed. By the way, book a reservation thru Resy or directly with me. We found two seats at the bar of this place called Snug and happily found hooks for our purses underneath the bar top. There were three bartenders servicing guests and one looked at me like he recognized me but didn’t say anything. Looking over the menu above the back bar shelves were beer, glasses of wine and one or two cocktails. A lady bartender said hello asked us what we would like. Kim went with the Summer Breeze by LibertineBrewing Company from Santa Barbara, California and I went with the Amarillo Pop! sour by Grimm Artisenal Ales from Brooklyn, New York. A beer has never gone down this quickly for me. We cashed out, jumped off our wooden bar stools, said our thank you and continued our way down Fillmore Street. 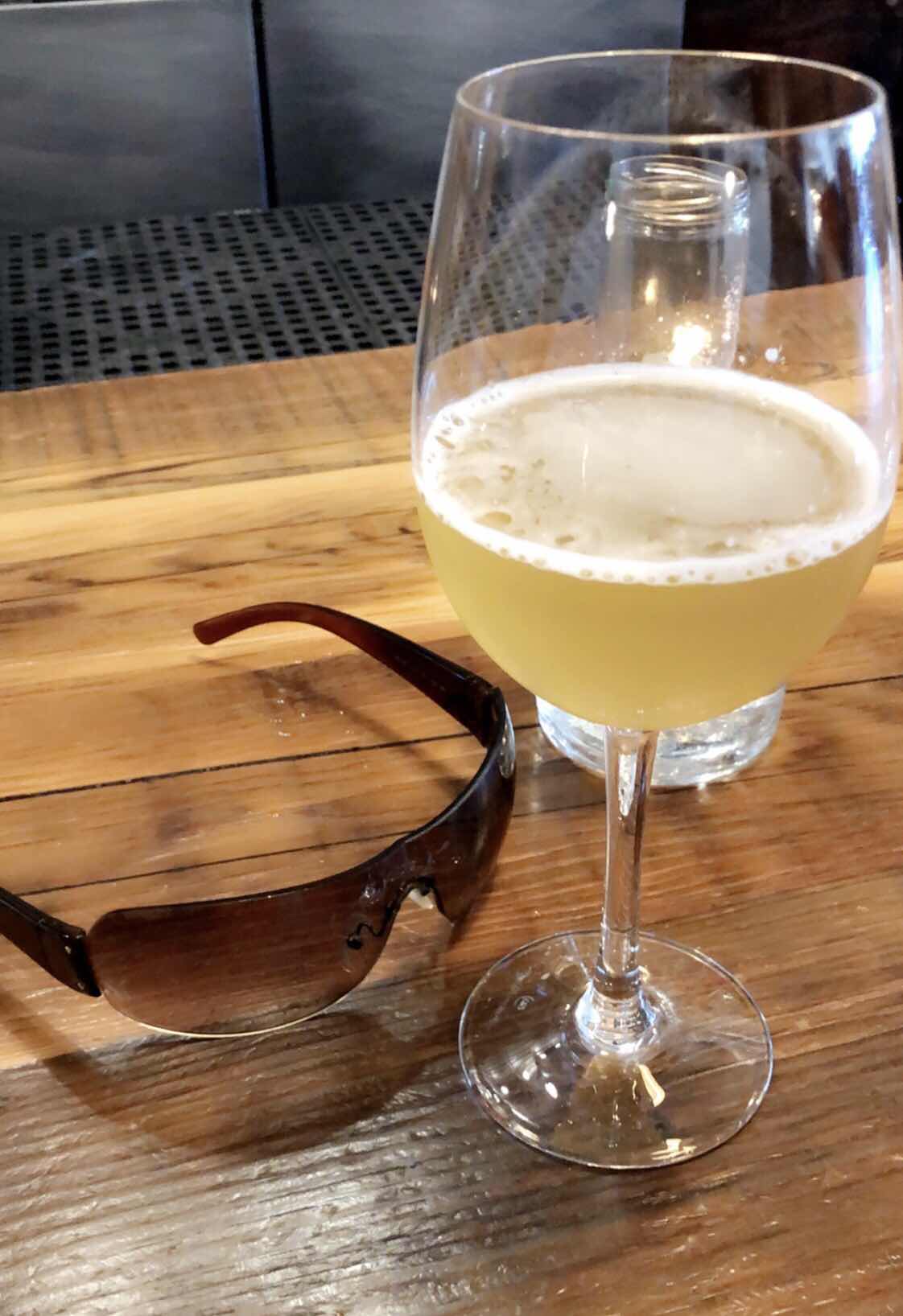 Taste buds were satisfied with our first drop of alcohol that day and we had time to kill before our 5:30 PM reservation at Florio, a French Italian restaurant. I thought it’d be perfect for Kim as she is heads to Paris soon and I have had coworkers book reservations there for guests. The smell of fresh waffle cones and a line of folks wrapped in the store of Salt & Straw caught our attention. We skimmed the flavors and they were very unique. They had their usual flavors like Dandelion Chocolate Hazelnut Cookies and Cream and Salted, Malted Chocolate Cookie Dough and seasonal flavors like Hey Boo Coconut Jam & Rice Crispy Treats. We had planned to come back after dinner if there was a room.

Crossing the street, I saw that there was Sift Cupcakes!  Oooohhhh. The previous weekend, we headed up to Healdsburg to wine taste. On our way up, I pointed out Sift. It’s so good. The Pink Champagne and the Stud Muffin is the best.
We passed Florio as they weren’t quite open yet and went into Saje and was immediately punched in the face with scents. It was better than the folks that bathe in their cologne and perfume but it was still a shock. We looked around and were briefly told about aromatherapy. I have so many products at home I need to use and try. I couldn’t justify paying $27 for some oils. Kim gets migraines and she has a long trip planned to Europe. If there was one thing I would recommend her getting was the eye mask that had some lavender in it. I won’t travel without my eye mask.
It was 5:30 PM and we walked nearly next door into Florio. We were greeted by John at the podium and stated we had a dinner reservation. As the first ones in the restaurant, we had our choice of spots. I picked a table and Kim gave me the banquet seat as my back was hurting a bit. Our waters were poured and an older couple was sat right next to us. The woman immediately started to cough without covering her mouth. I looked at Kim to see if she had the same reaction on her face. Nope. Just me. I asked if we could be moved to a high top near the bar. I then told Kim that I cannot stand being around people that do not cover their nose and mouth when coughing or sneezing. I got so incredibly sick during the last few days of my first trip in Europe because we would be in these tour busses and on a cruise and people had no manners when they coughed of sneezed. With an entire restaurant open, I did not want to be close to those germs. Sorry, Lady. It’s you.
The menu looked great. Kim ordered the corn soup ($11 – creme fraiche, scallions and fresno chili on the side – she doesn’t like spicy) and the seared duck breast ($32) with brown butter, haircut vert and yellow wax beans and balsamic shallots and duck jus. She asked me what would go best with the duck. I recommended a pinot noir and she agreed. She placed her order, while I had the haricut vert with frissee, toasted almonds in a healthy bacon vinaigrette ($14) and the house made taqliolini with pioppini and white beech mushrooms and burgundy truffles ($23). Kim chose the winners of the meal. Her soup was probably the best corn soup I’ve ever had. The duck was heavenly. I really liked my first course but I took the rest of my pasta home. I added parmesan cheese but it needed some flavor. I planned to add some garlic salt to it. Perhaps it was trying to make the truffles the star. We had excellent service and can definitely send folks here now that I can recommend what they should order. 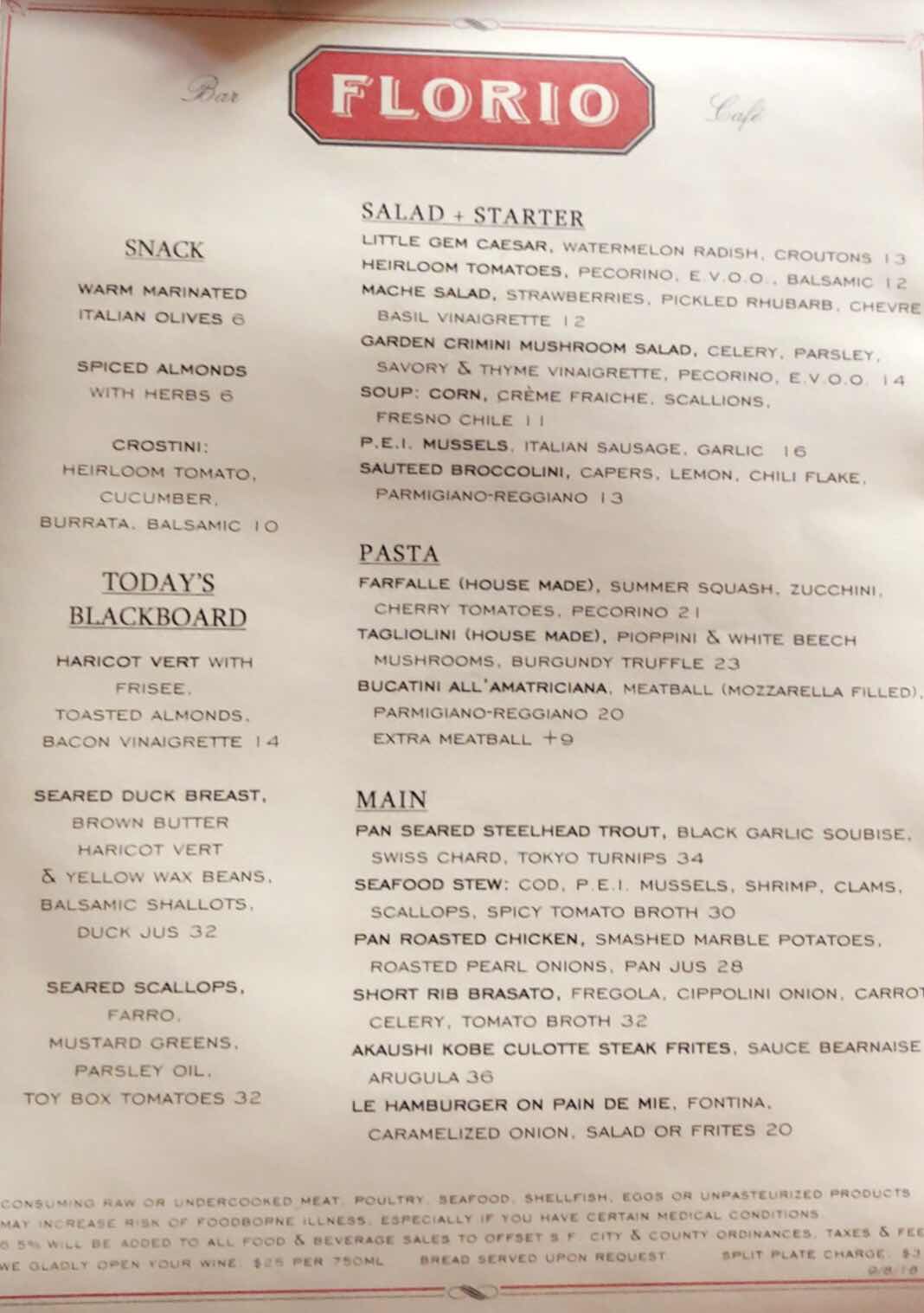 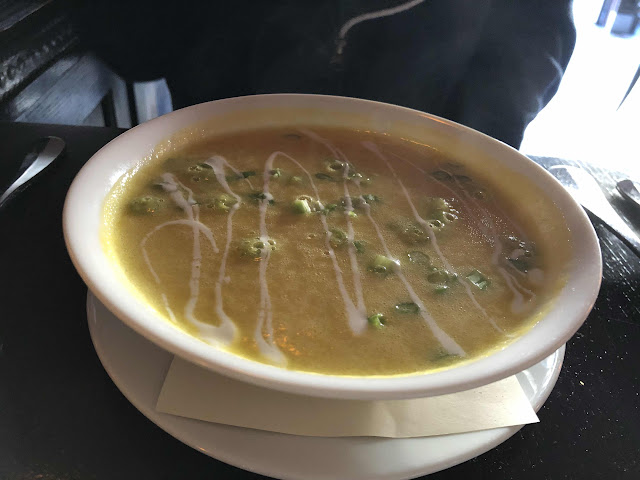 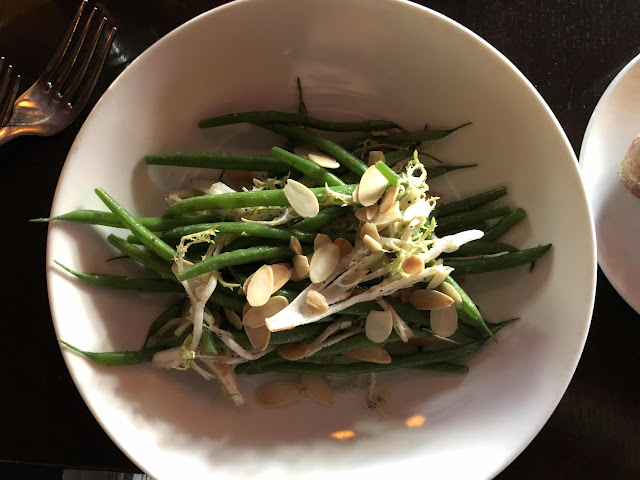 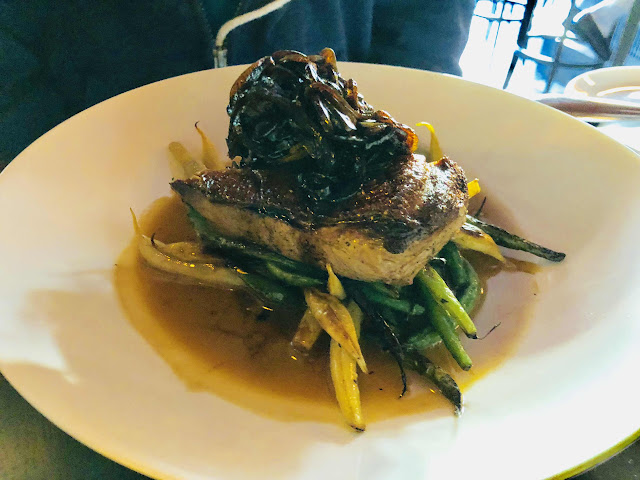 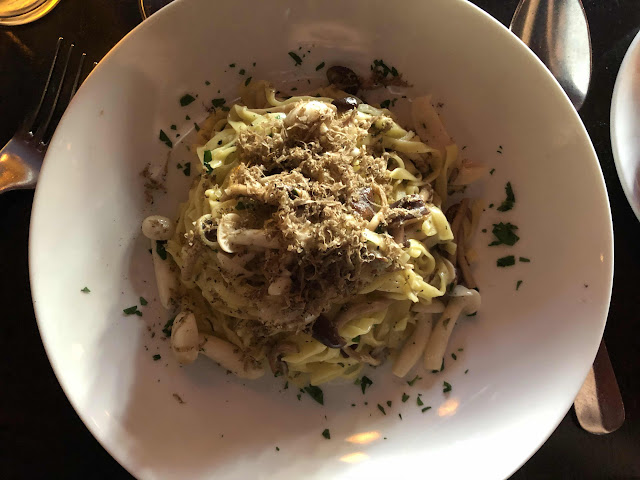 I confirmed with Kim that she still wanted Salt & Straw. An enthusiastic ‘yes’ was her answer. They definitely had some unique combinations I have never seen before. After tasting a couple I wasn’t in love with, I just picked one I thought I was going to like so I d
idn’t hold up the line. I also got it in in a waffle cone as I am constantly tempted by the Ben & Jerry’s in the building when I’m working at the Argonaut Hotel. Kim got her’s in a bowl. We headed towards the car but I wanted her to see what Sift Cupcakes had to offer. Walking in with dessert already, they weren’t going to make a sale. The young girl grabbed one of the cupcakes I named and assumed I wanted it to go. I said I was just saying its name and she looked irritated as she put it back. Yeah, definitely no sale, Miss, with that attitude. And then our Roommate Day was over. 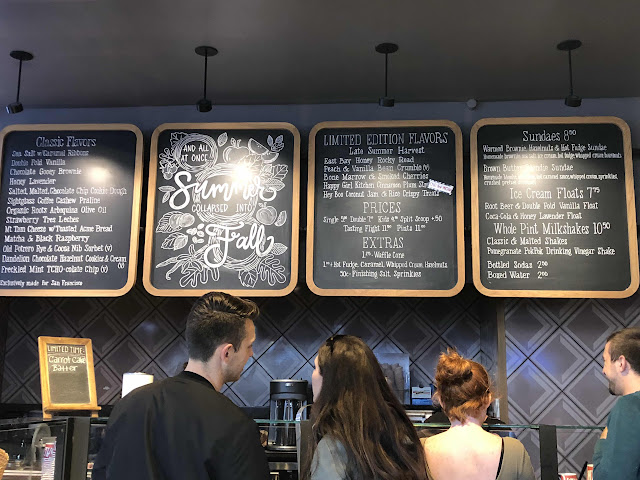 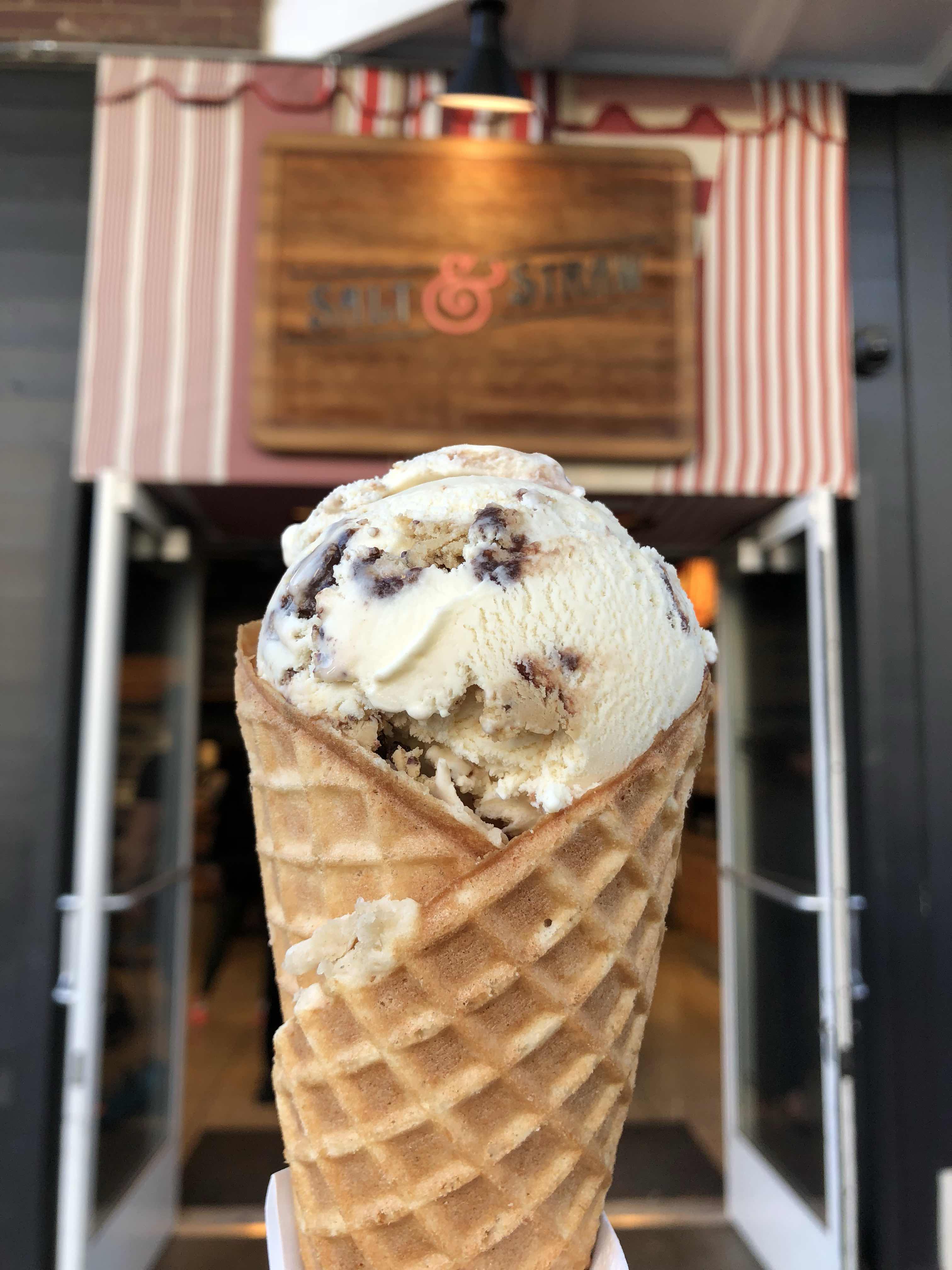 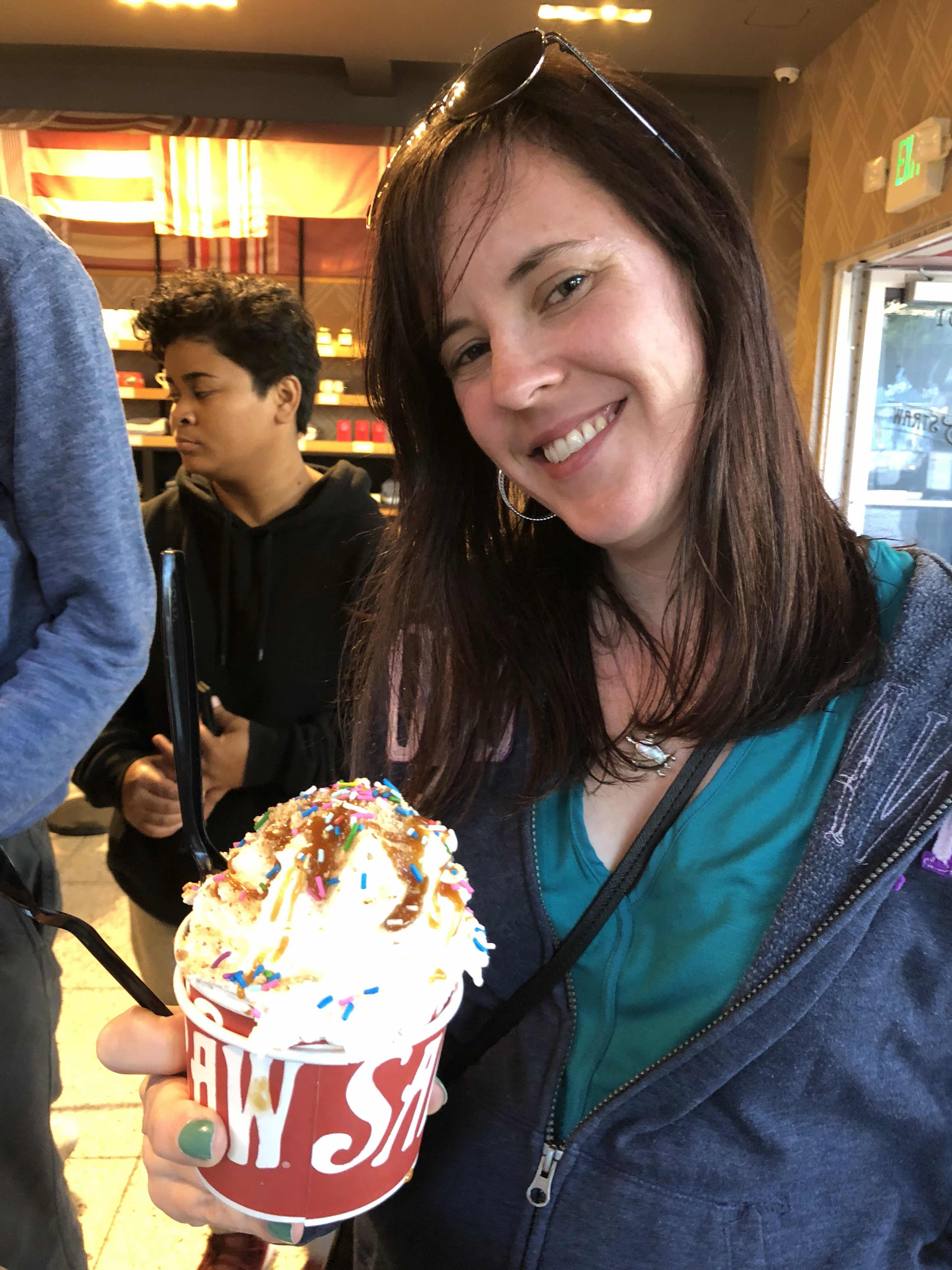 We have a weekly Roommate Day to stay tuned for more, including a recap of our trip in Southern California and back for Disneyland in November! As a Certified Disney Travel Agent, I have to go again.

One thought on “Filled on Fillmore”