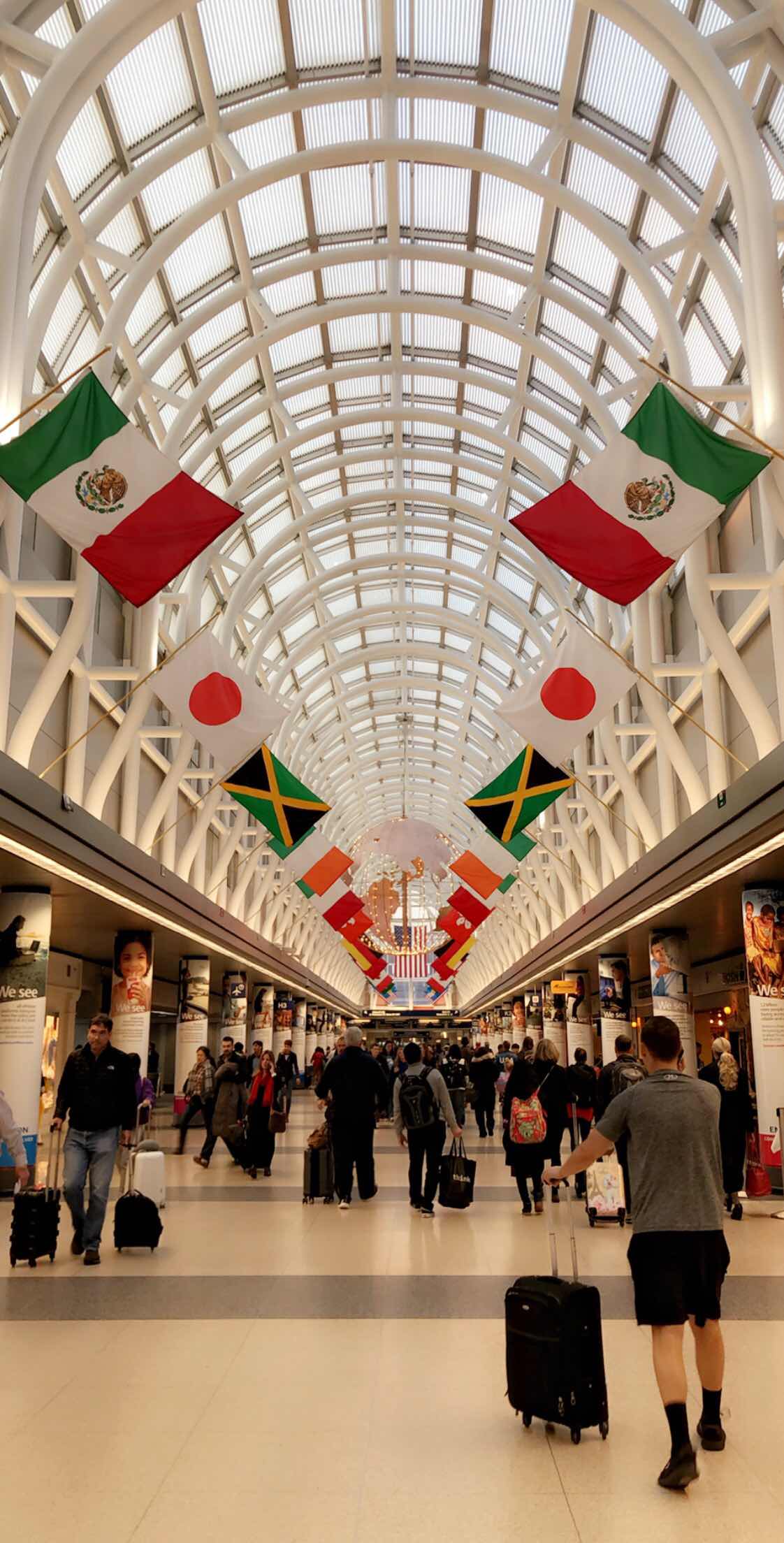 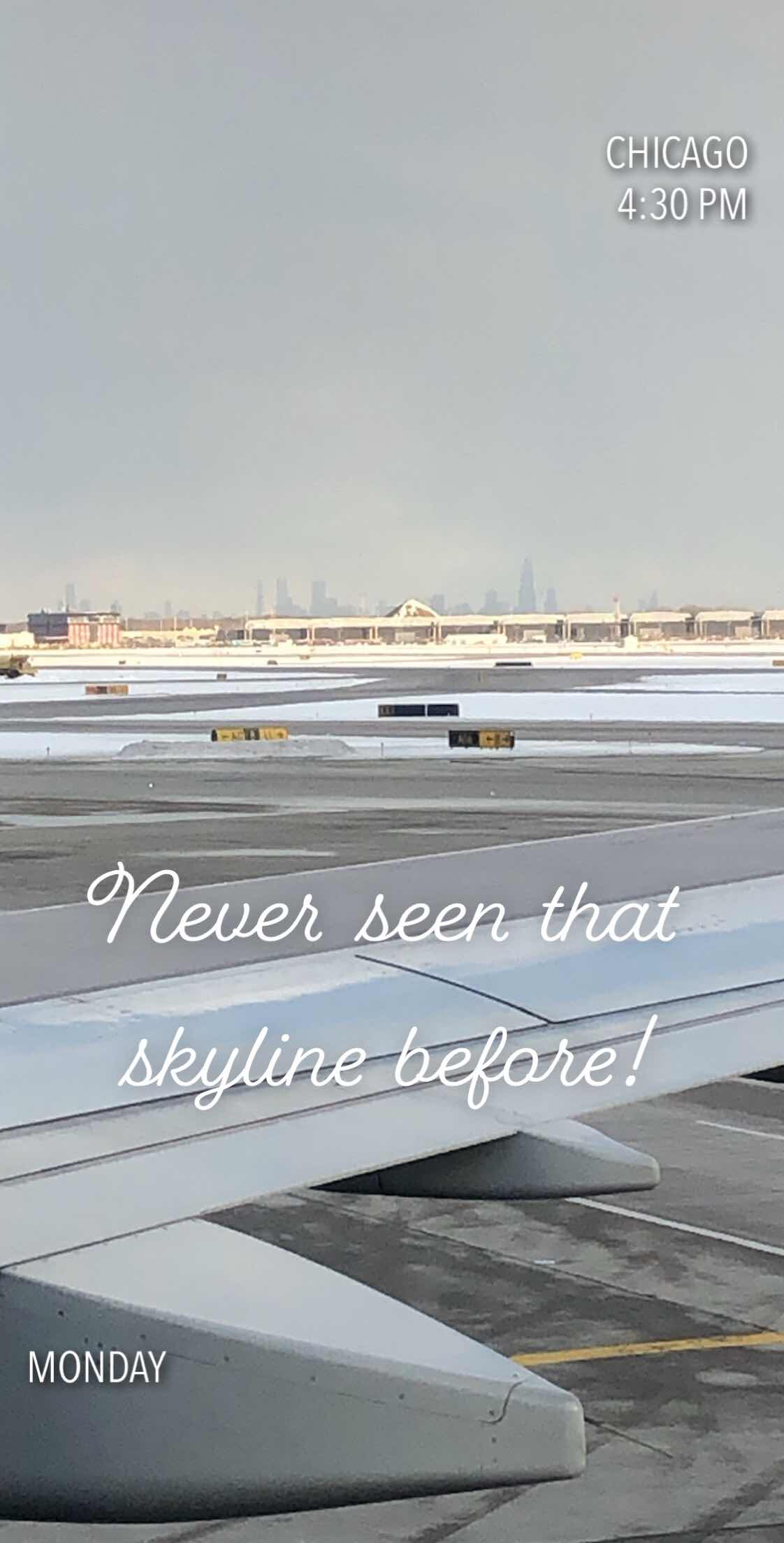 I was waiting to board my American Airlines flight in Chicago to get to Albany, New York. The layover was three hours long. Snacking on my Garrett cheesy popcorn, I get a vibration in my back pocket. I look around me to find a disappointing look on the faces of my fellow travelers. I looked at the screen above the desk. 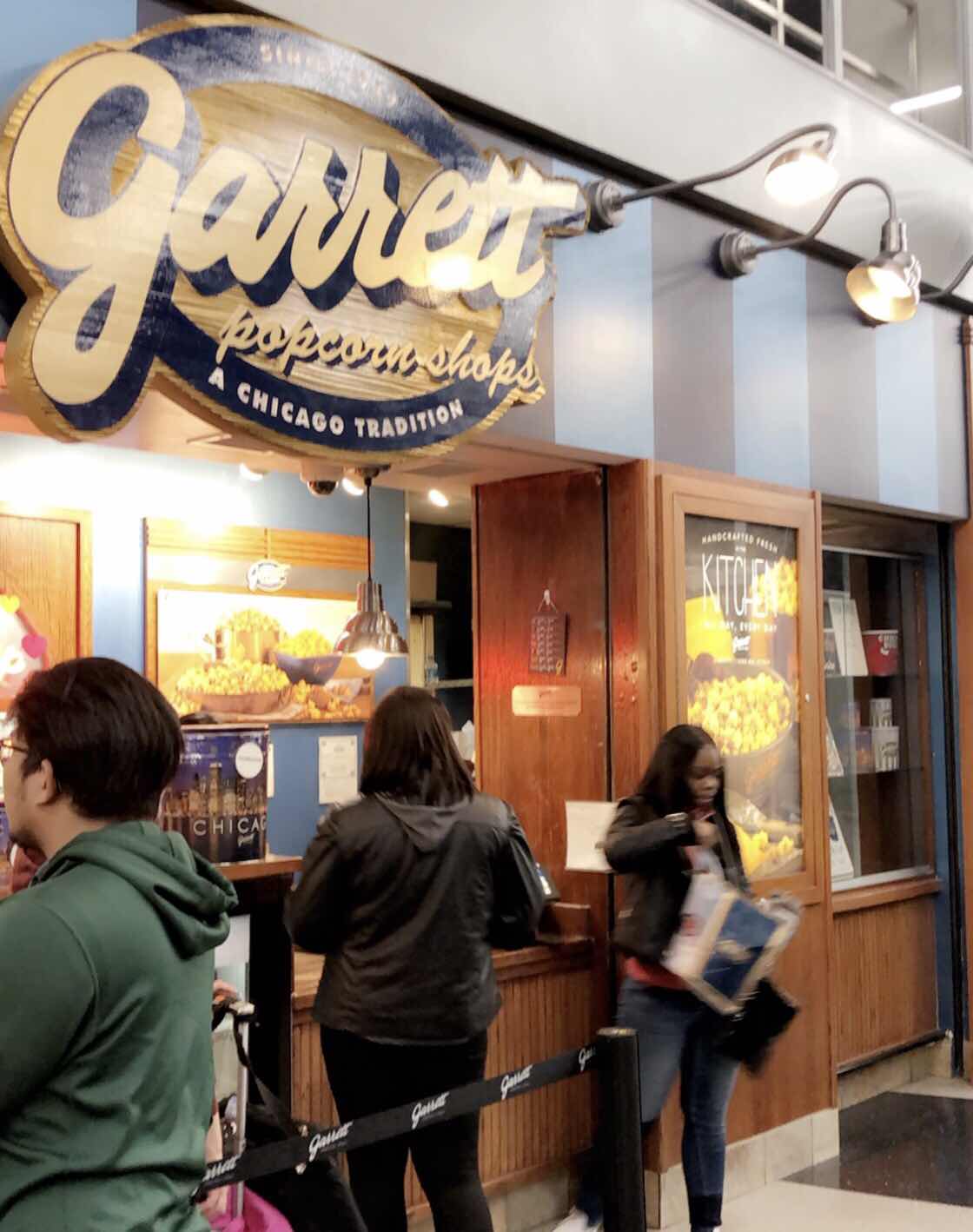 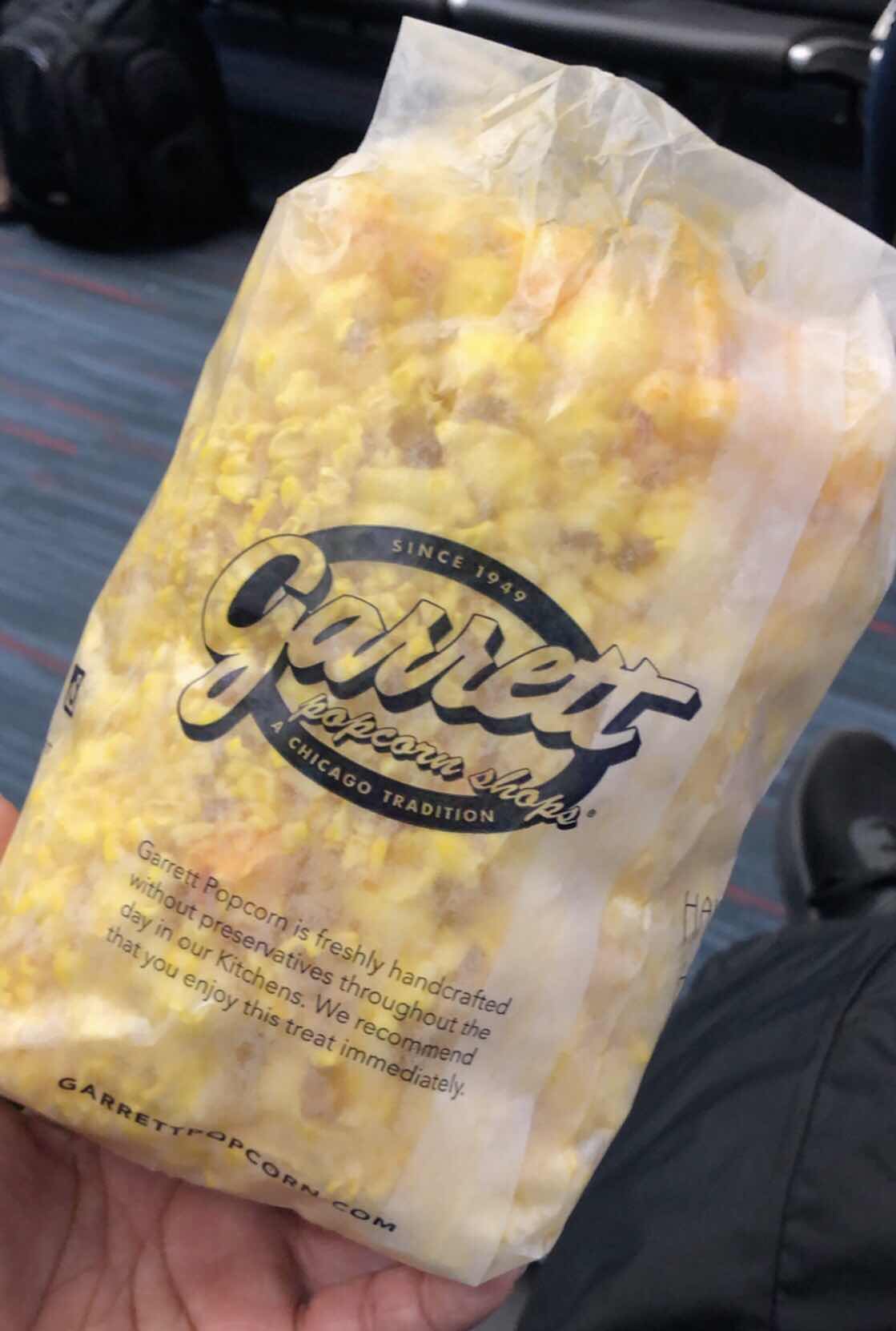 I must have had great travel luck as I have never had a flight cancelled on me. Then again, it’s not very often that I travel in snowy conditions like the East coast was experiencing. It was almost 8 PM. I had already eaten, I was automatically booked on a 9:24 AM flight the following morning and I was actually happy I get to spend the night in Chicago. Unfortunately, the airport wasn’t too close to downtown. The discounted voucher with a phone number to get a hotel room for the night didn’t have an appealing option. I decided to find myself a hotel near The Bean. Uber there was about $30. Not bad.

Not being familiar with Chicago, I selected a hotel called Hotel Julian. It was a block away from Millennium Park where The Bean was located and it was near City Walk and the river. Plus it was cheap! And, the same name of a one of my favorite Army boys. Booked, called an Uber and headed downtown.

After dropping off my co-riders, I got to chatting with my driver, Mohammed. I was going to be his last ride after a 13-hour day. He said he had a family of six he was helping in Sri Lanka. His sisters were going to school and his mother needed assistance. He had a crazy amount of completed rides. He was nice enough to point out landmarks, where to eat and drop me right in front of the Hotel Julian. He asked me to review him. I did and sent him a nice tip to help his family back home. I told him to make sure his sisters take care of him too!

Hotel Julian’s double automatic doors opened to the steakhouse About Last Knives and a dim walkway to the front desk. I checked in with a nice gentlemen who advised me on where to go to explore and to eat. He also assured me that it was safe to walk at night. And alone. Perfect. I was going to make the most of my time in Chicago. 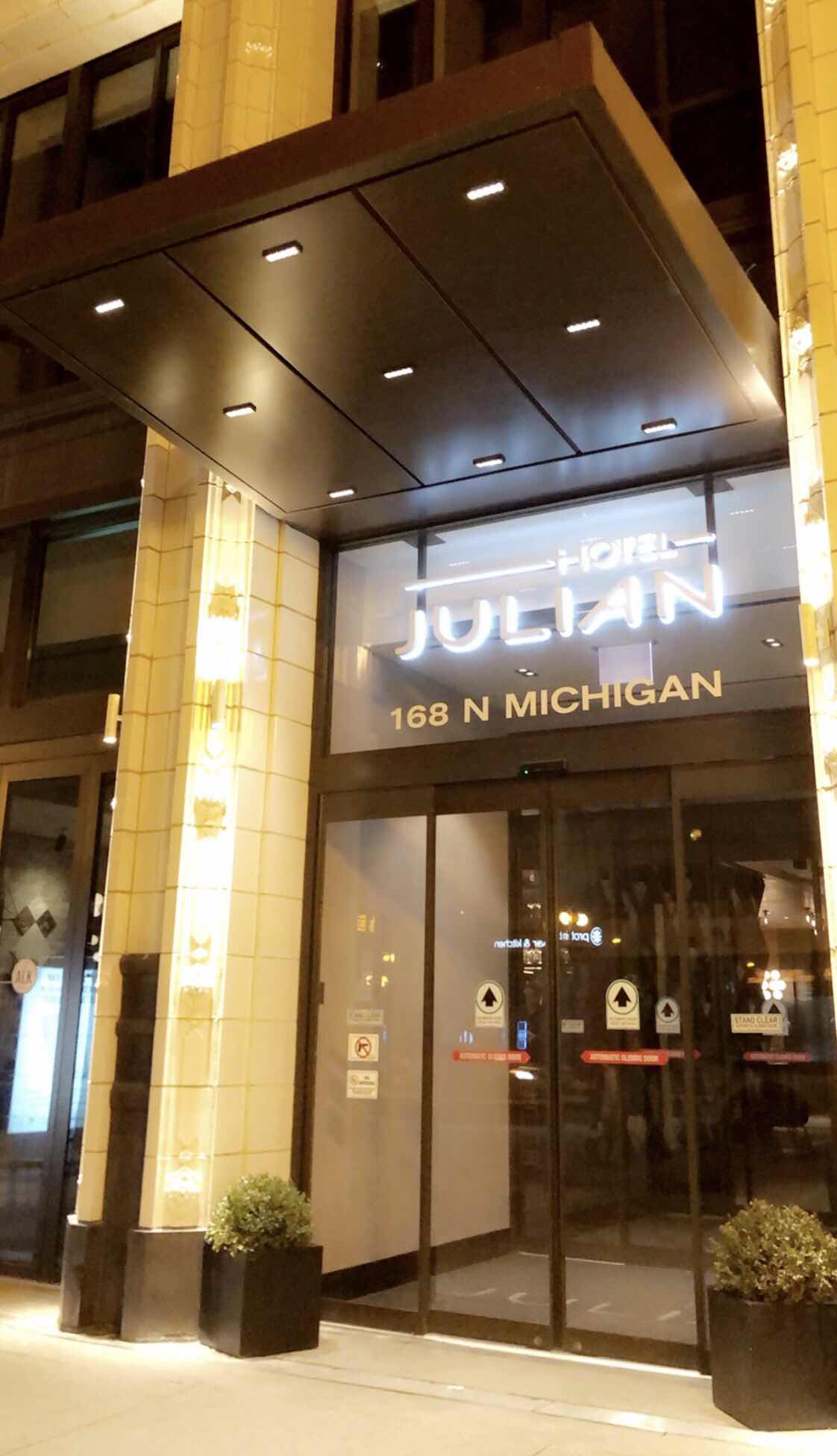 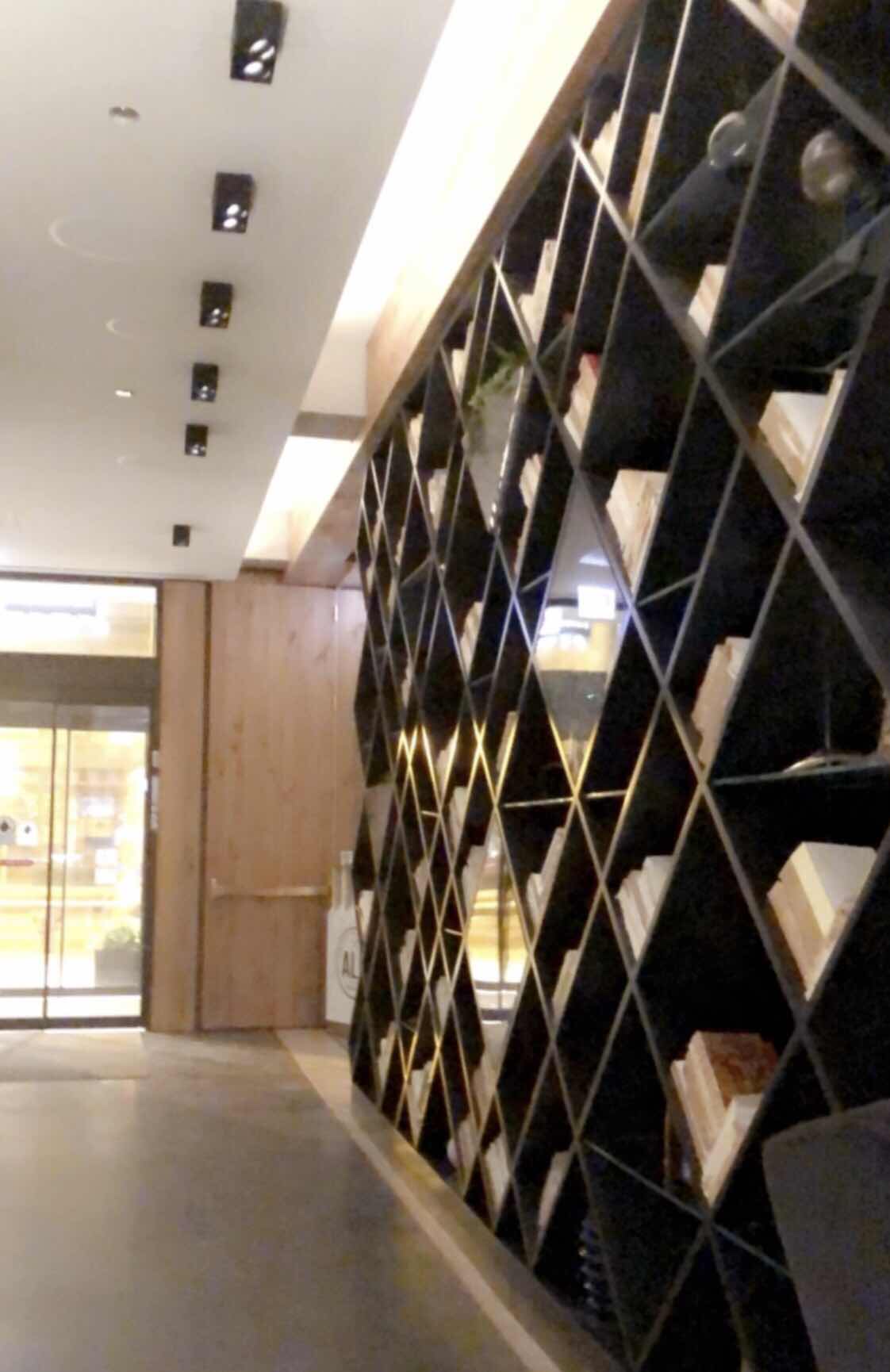 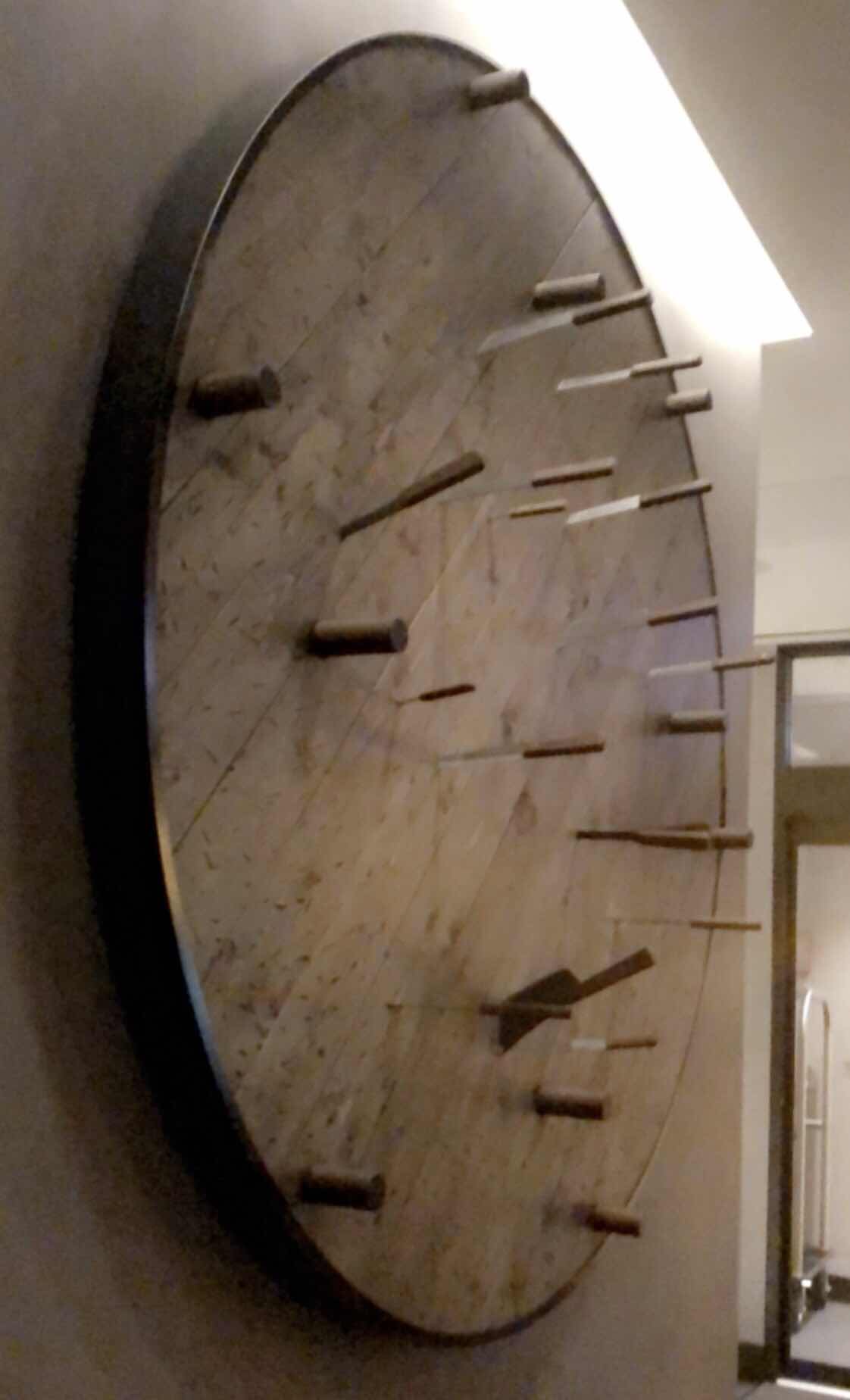 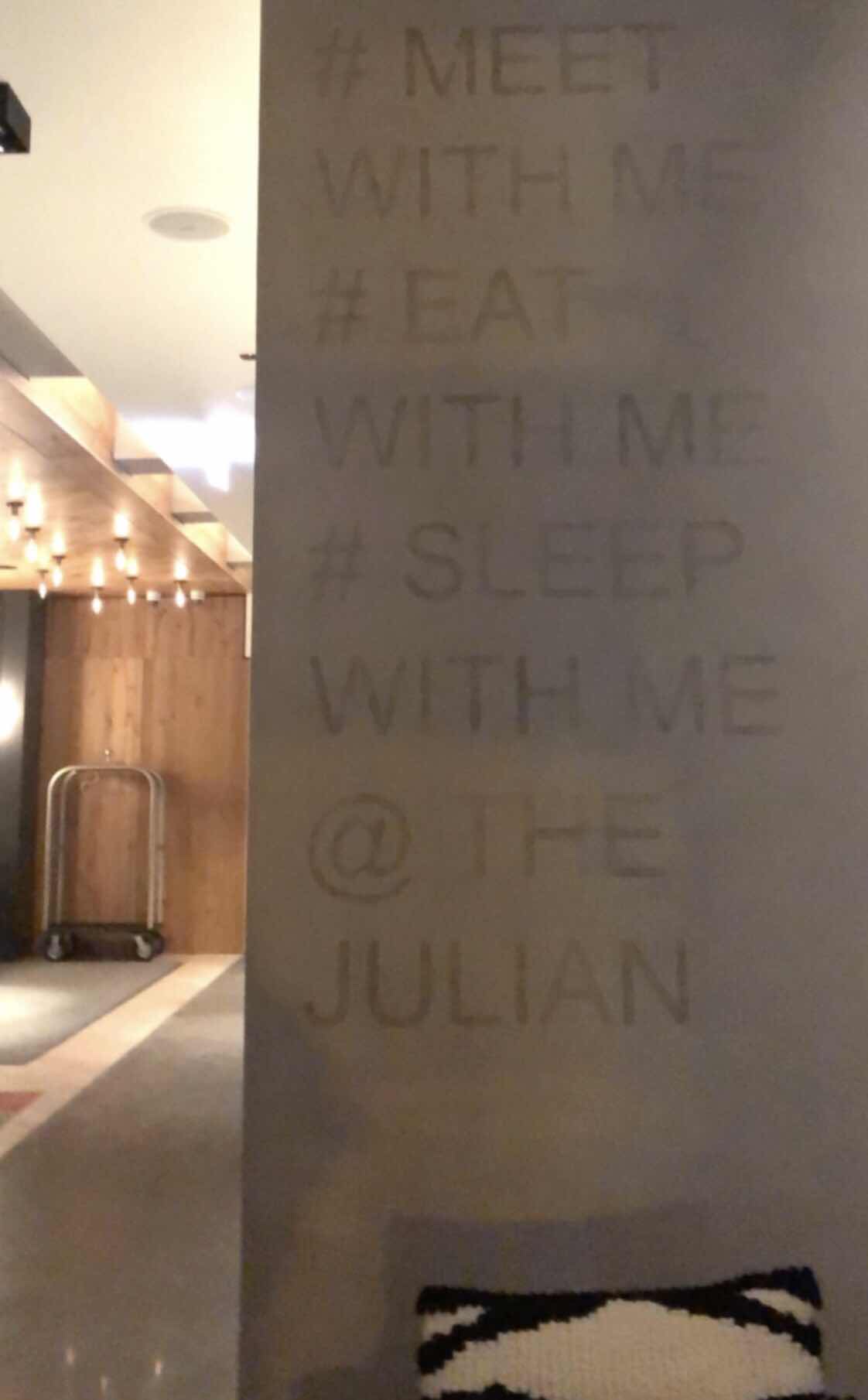 When the elevator doors opened, every inch is covered in framed photos. Honestly, I did not recognize most of the figures but it was a great design. The doors opened again to the second floor. It was also the same floor as the fitness center. Unfortunately, my work out clothes remained at Chicago O’Hare. Then there’s the unveiling of my room. 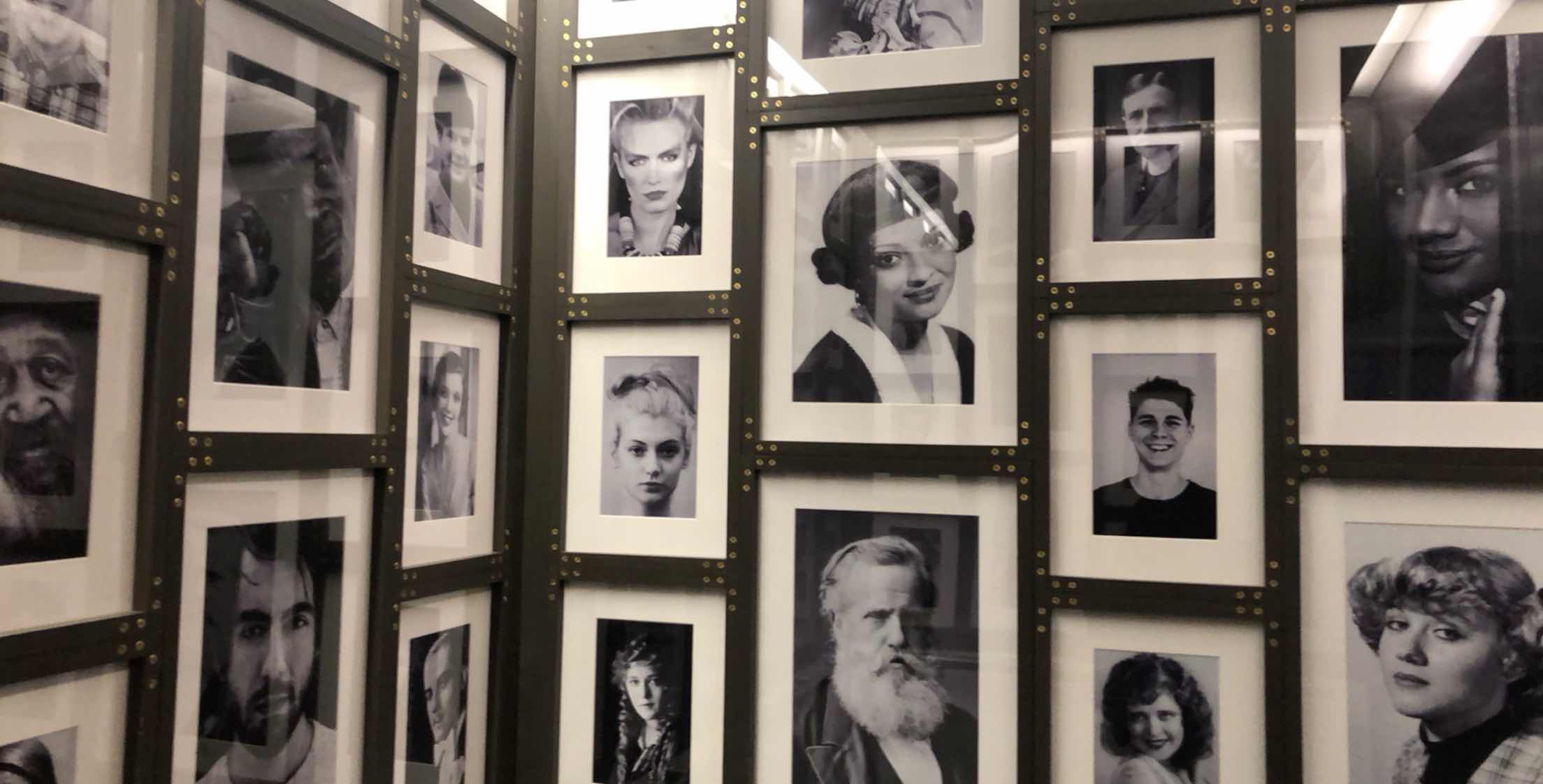 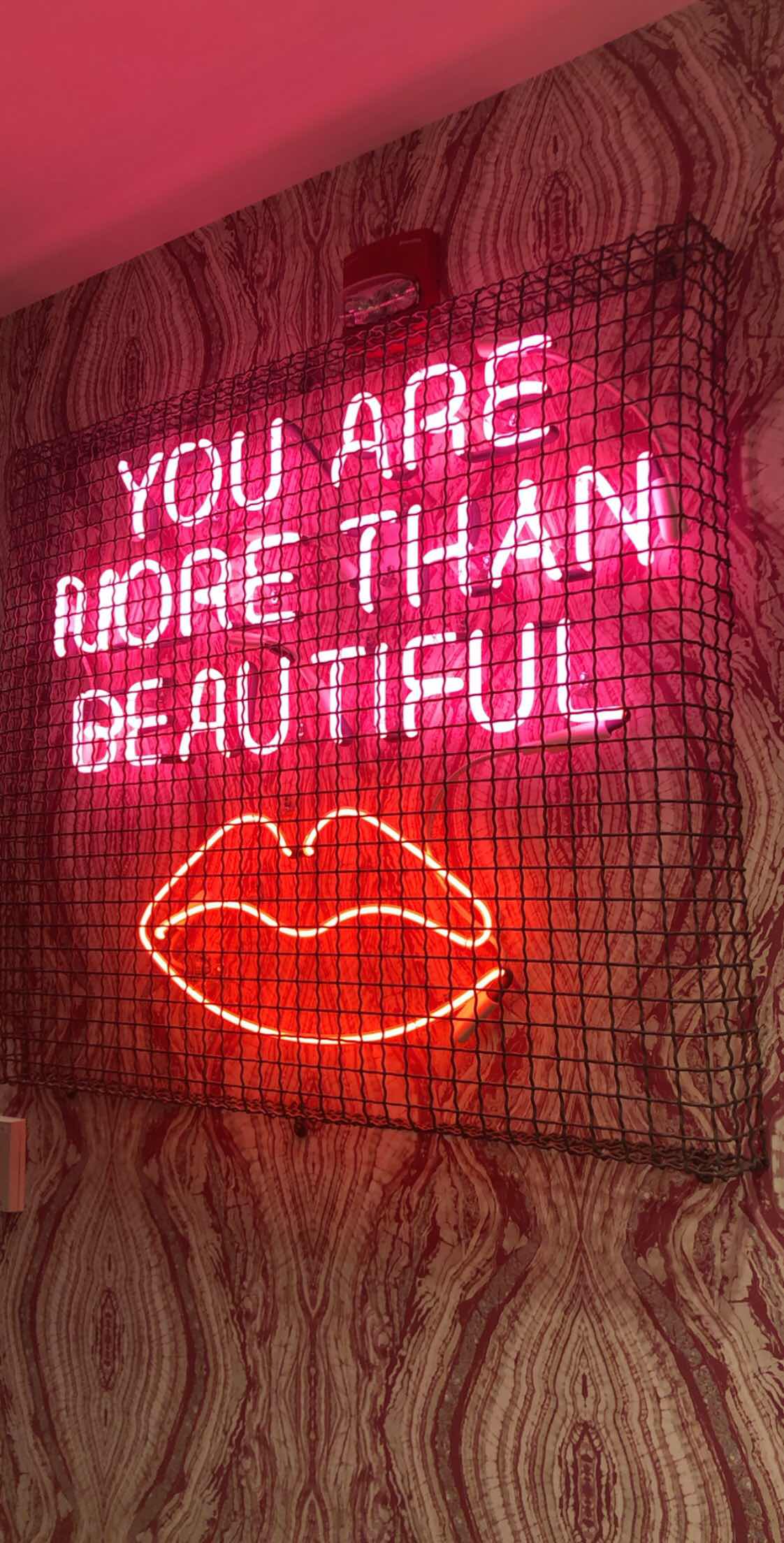 Scan the key card above the door knob and you open the door to some darkness. Step in and the lights automatically turn on. Step into the white, clean tiled bathroom to your immediate right and the lights turn on as well. An immaculate bathroom with shower stall was appreciated. Turn to your right from the bathroom, you see you a full-length mirror to your left and hooks on the wall. Along the same wall, you’ll find the flat screen television mounted on the wall and a small shelf to lay your key and other small items. Continue along that wall and you will find a desk with a phone, alarm clock and the tasty menu for About Last Knives downstairs. Oh, I wish I had the opportunity to try it! But they closed soon and they also have one in Southern California. I will have to scope it out the next time I am down south. 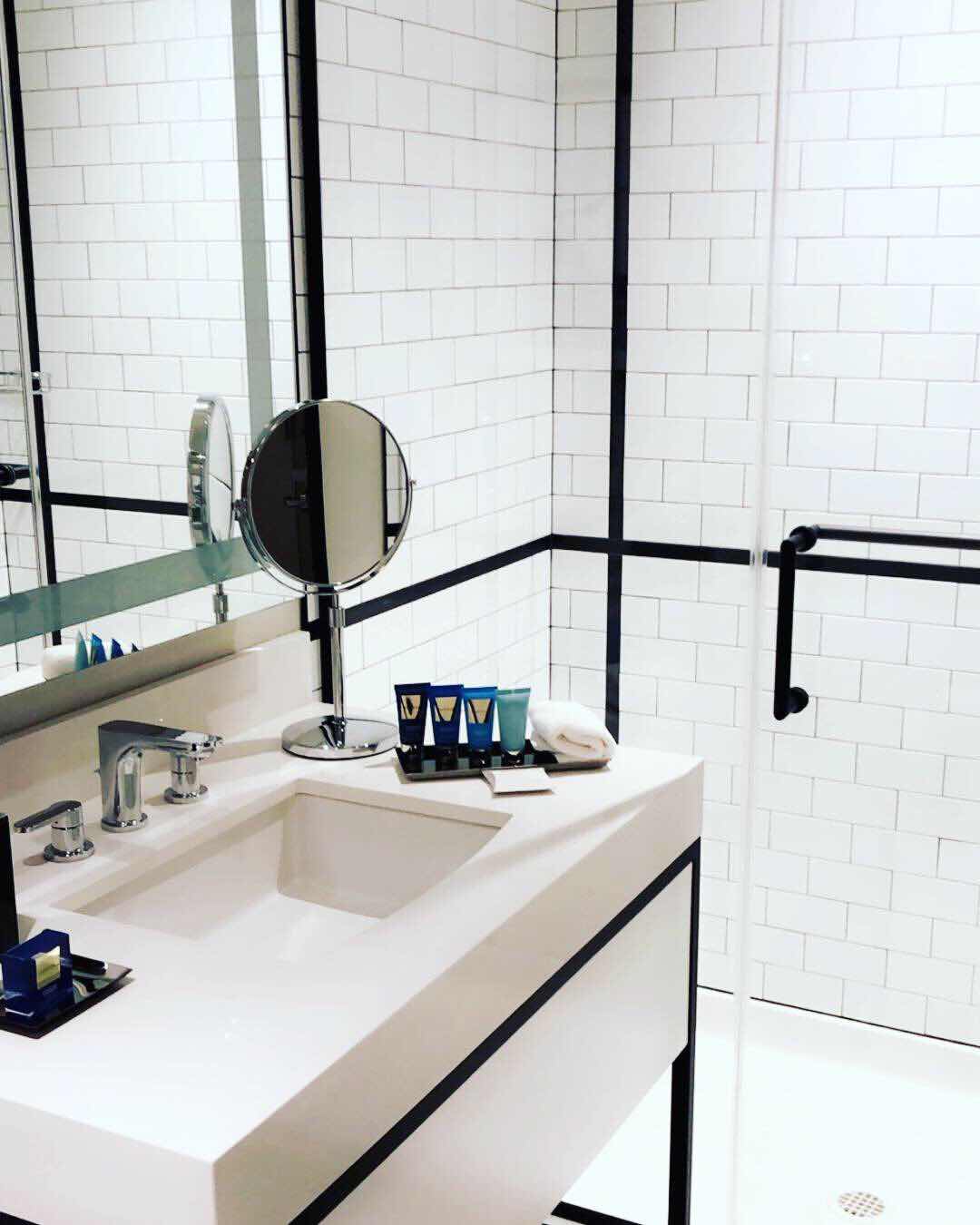 The floor to ceiling windows face Michigan Avenue. The double shade options are helpful for day to night and for privacy. You can see Stan’s Donuts was across the street. I was having that for breakfast the next morning.

The bed was a queen-sized with night stands, power outlets, a padded headboard and artwork just above that. To the right of the bed, you will find your ice bucket and coffee maker. Back to your foyer, there is a narrow closet that housed two white bathrobes. They were to be my nightgown come bed time. 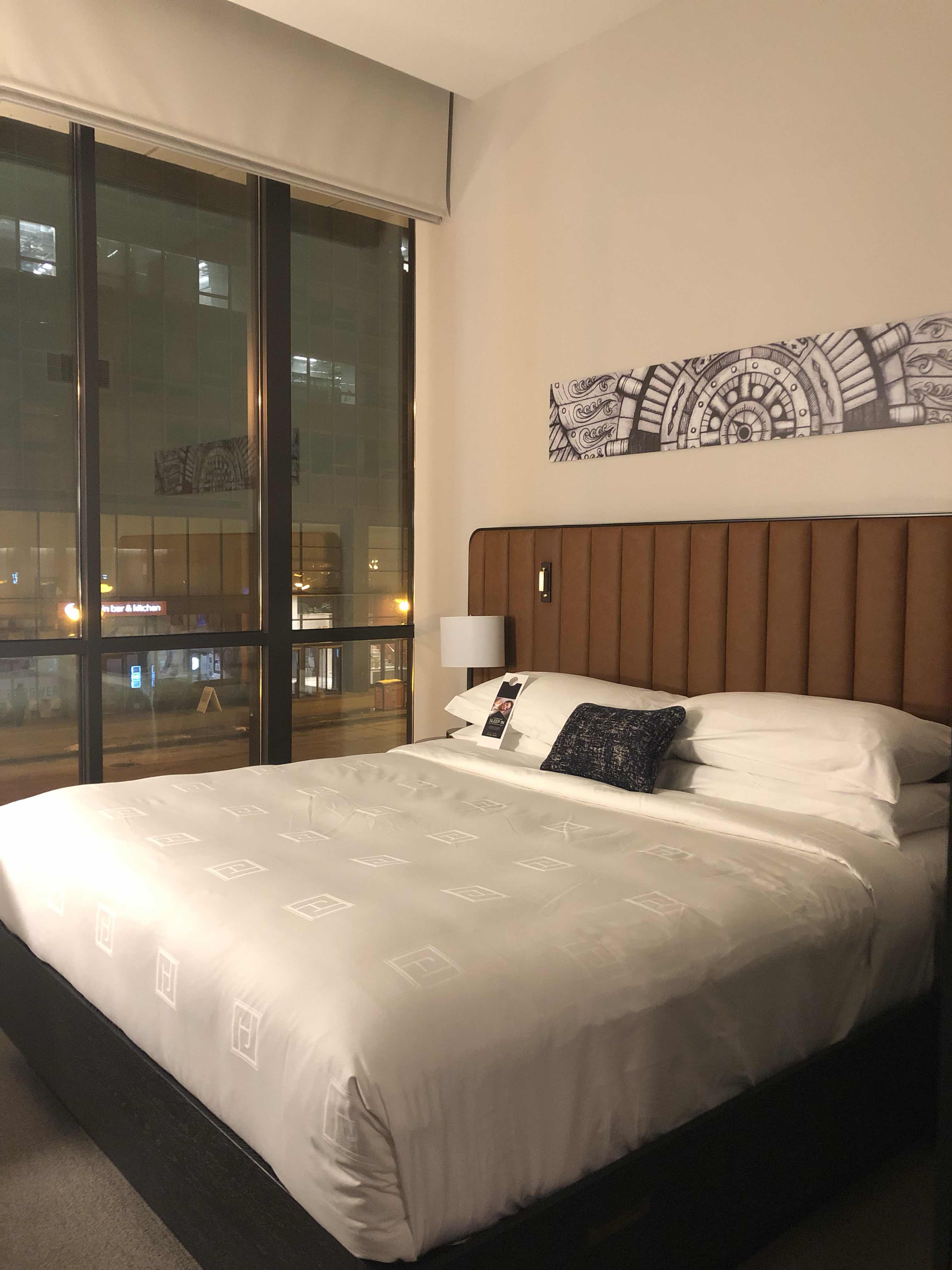 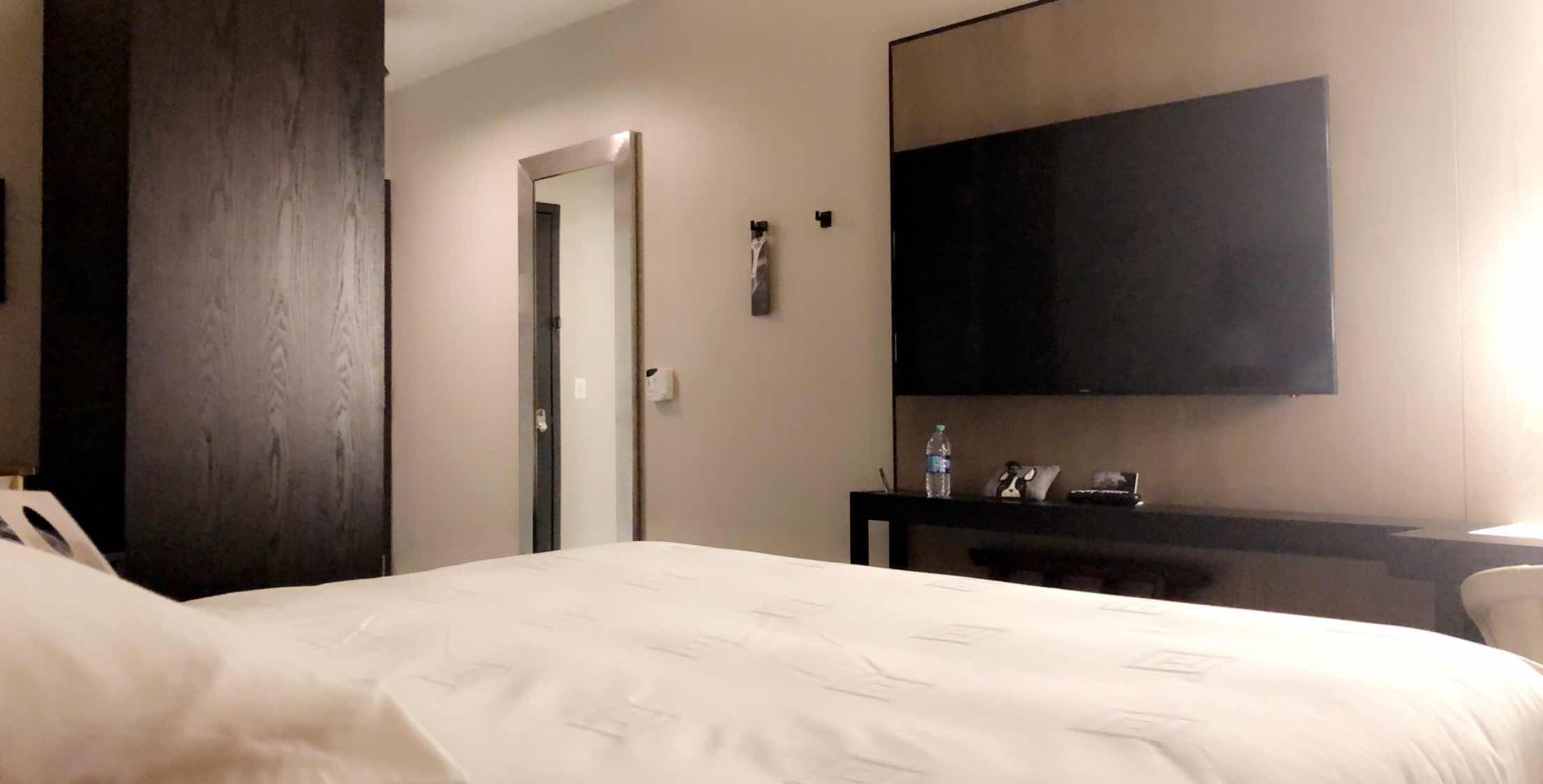 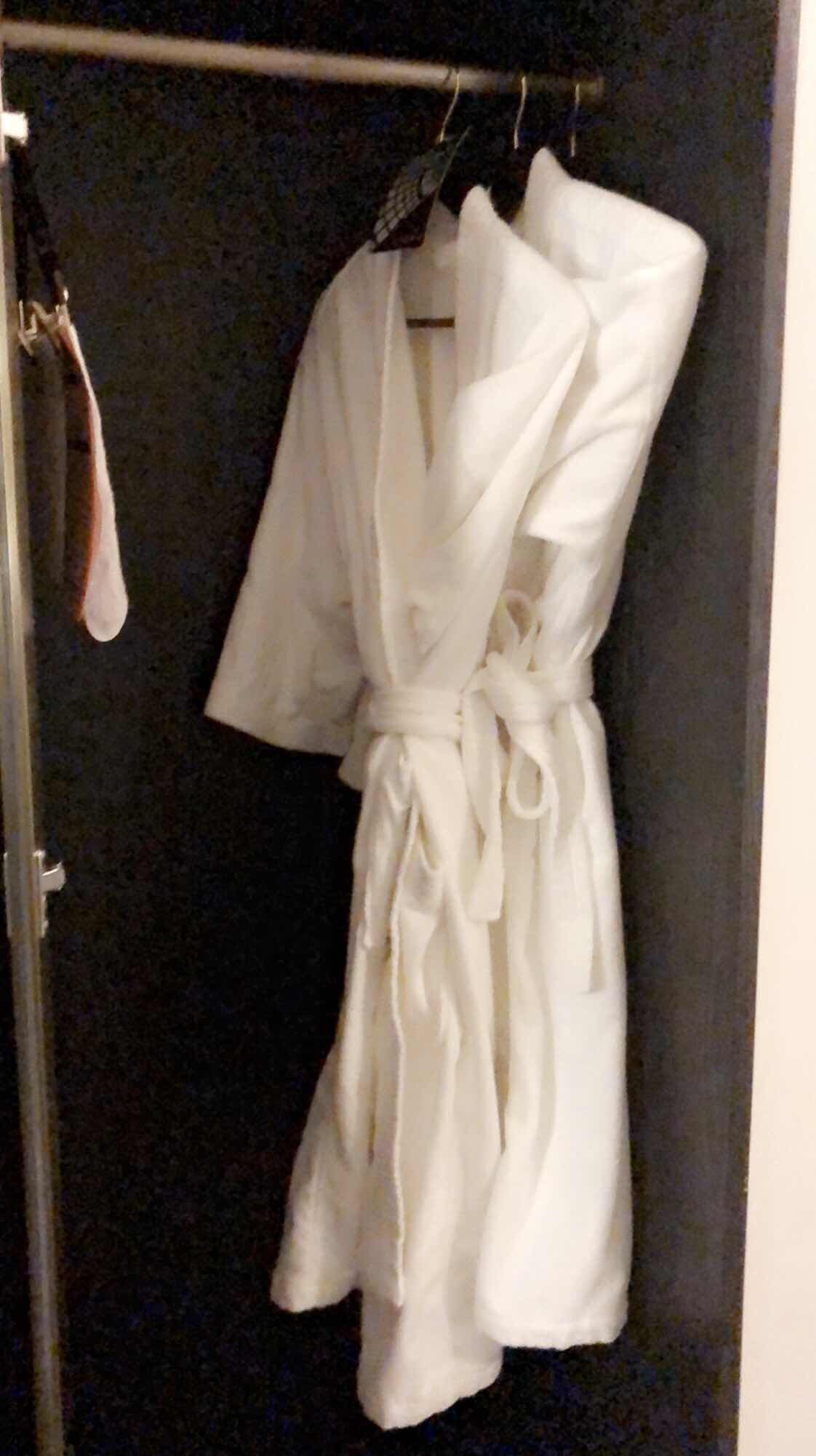 Next it was time to head out and explore. Bundled up and making sure I didn’t slip on some ice, I cautiously walked towards Millennium Park. The streets were nearly empty and it was quiet like the town had a curfew. I am used to being in San Francisco where there is so much commotion and traffic at all hours happening. Was it that safe?

I made my way into the park. I only crossed paths with one couple before I realized that The Be
an was right there! It was huge! As I approached, I was lucky to see that only two people were there and I was able to get this photo with the timer on my phone. It was so cool to see the frozen frijole with snow on it. I had to take off my gloves to handle my phone and I was starting to feel it in my skin. It was getting tight. I took my photos, including one with part of the bean and the building where the little girl in Adventures in Babysitting scaled the windows. I love that movie. I immediately put my gloves back on and went on my merry way. CHECK! 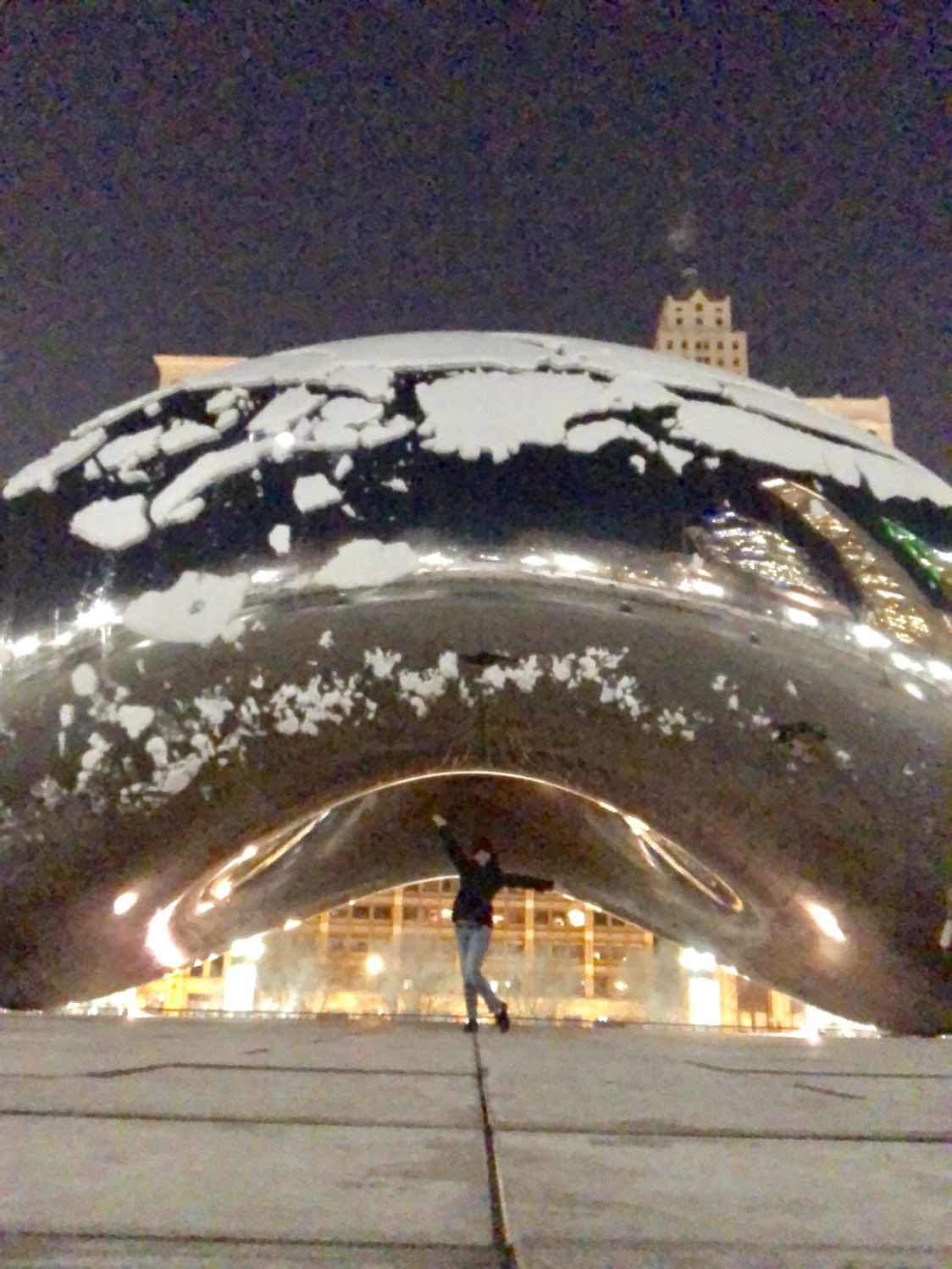 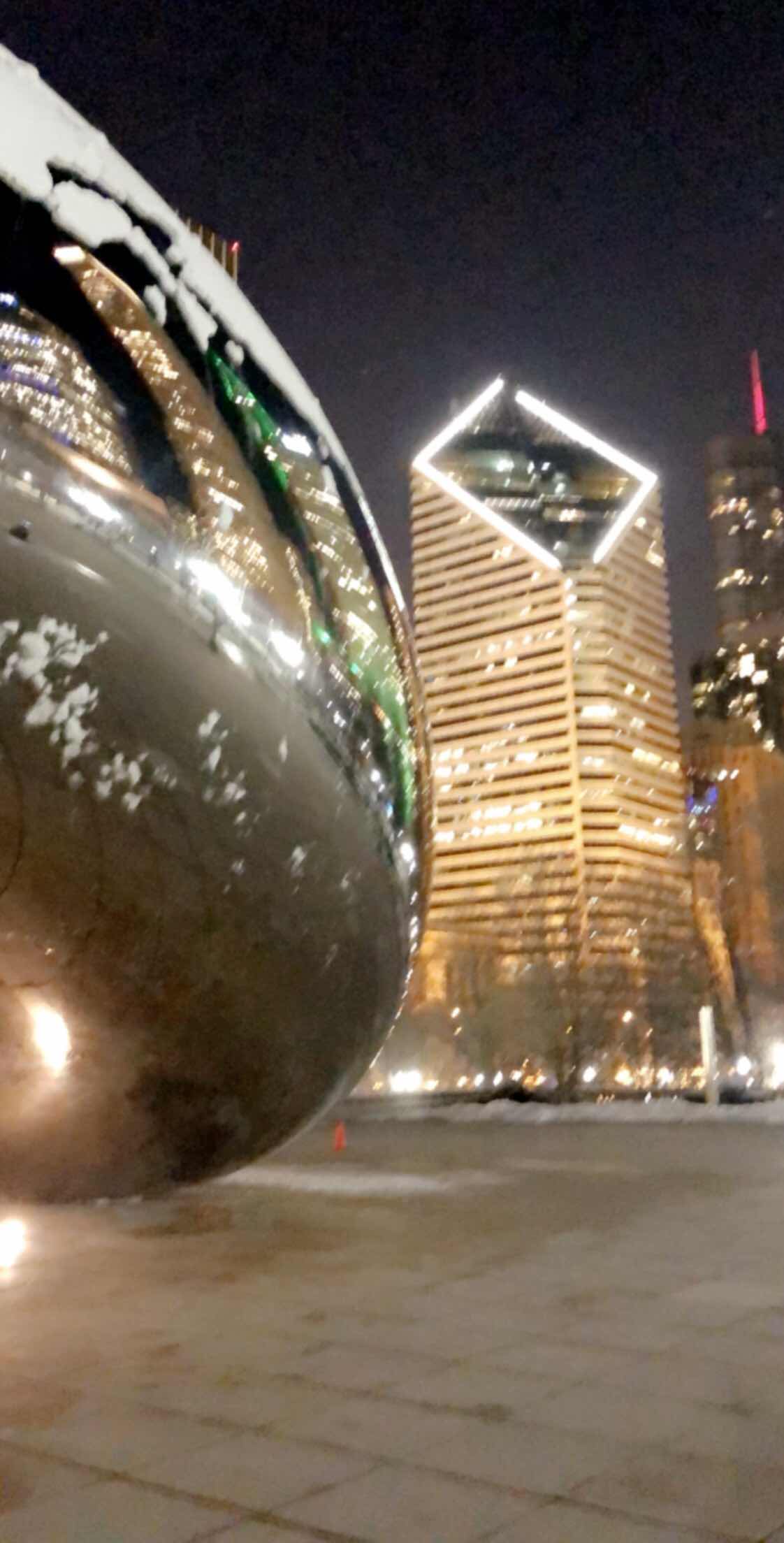 I decided to next head to the river. It was just three or so blocks away and the wind started to pick up. Chicago was the Windy City and was living up to its name. I started to jog to try to stay warm as I did during the hike the day before at Coyote Hills. It sort of helped but kept the blood moving and the heart pounding. I had to use my hand to cover my mouth and nose slightly because it was so very cold.

I made it to the river. I saw the building and landscapes that are in the opening of sitcoms such as Perfect Strangers and Family Matters. Plus, The Trump Building and the Chicago Tribune. When it’s nice, it would be great to dine at the restaurants along the river and take a boat ride. I crossed the river and it saddened me to see the homeless sitting there in the cold. We have homelessness in San Francisco but these conditions night after night is terrible. If there was a 7-11 open nearby, I would have loved to get them a coffee at least. 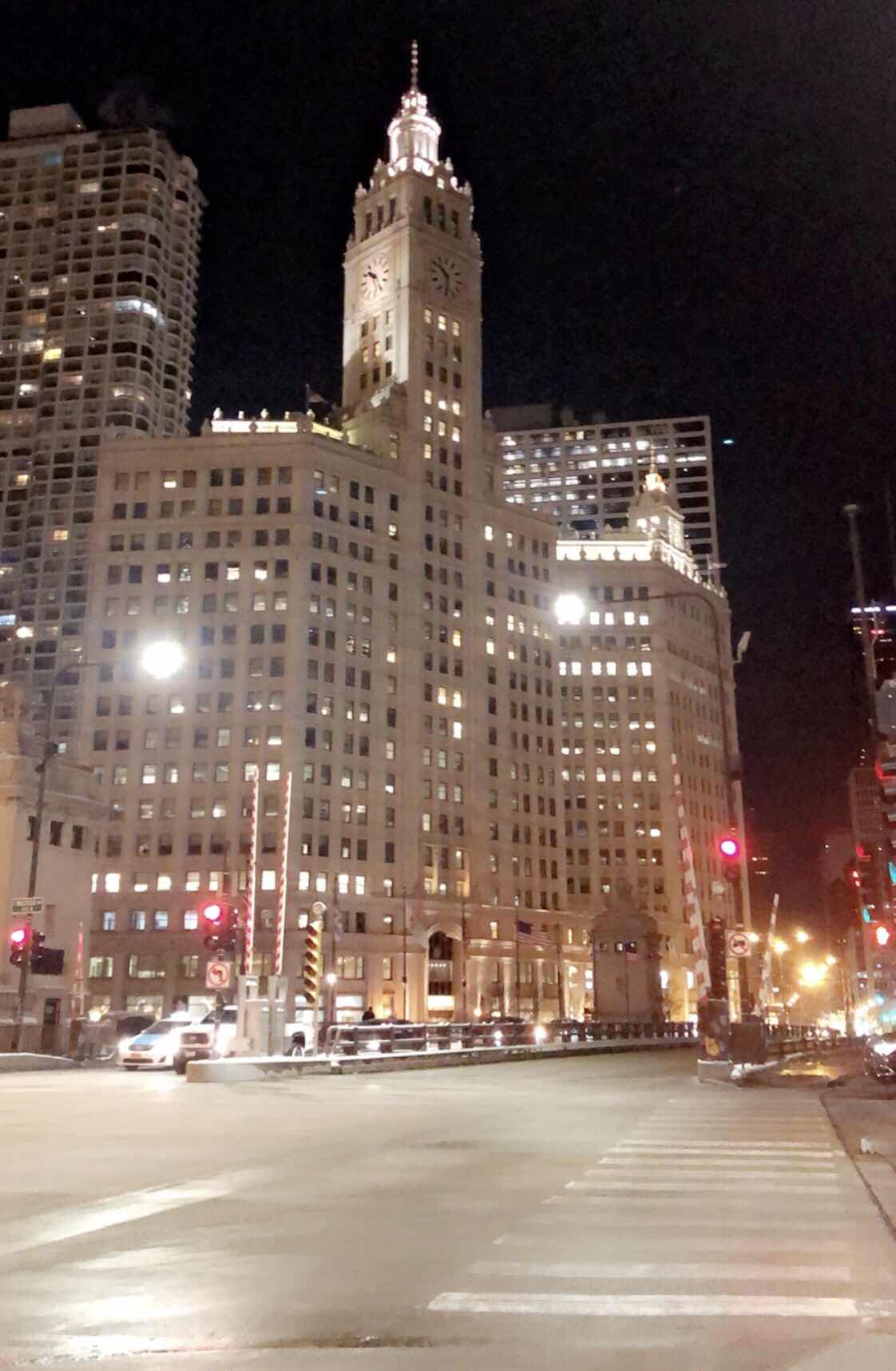 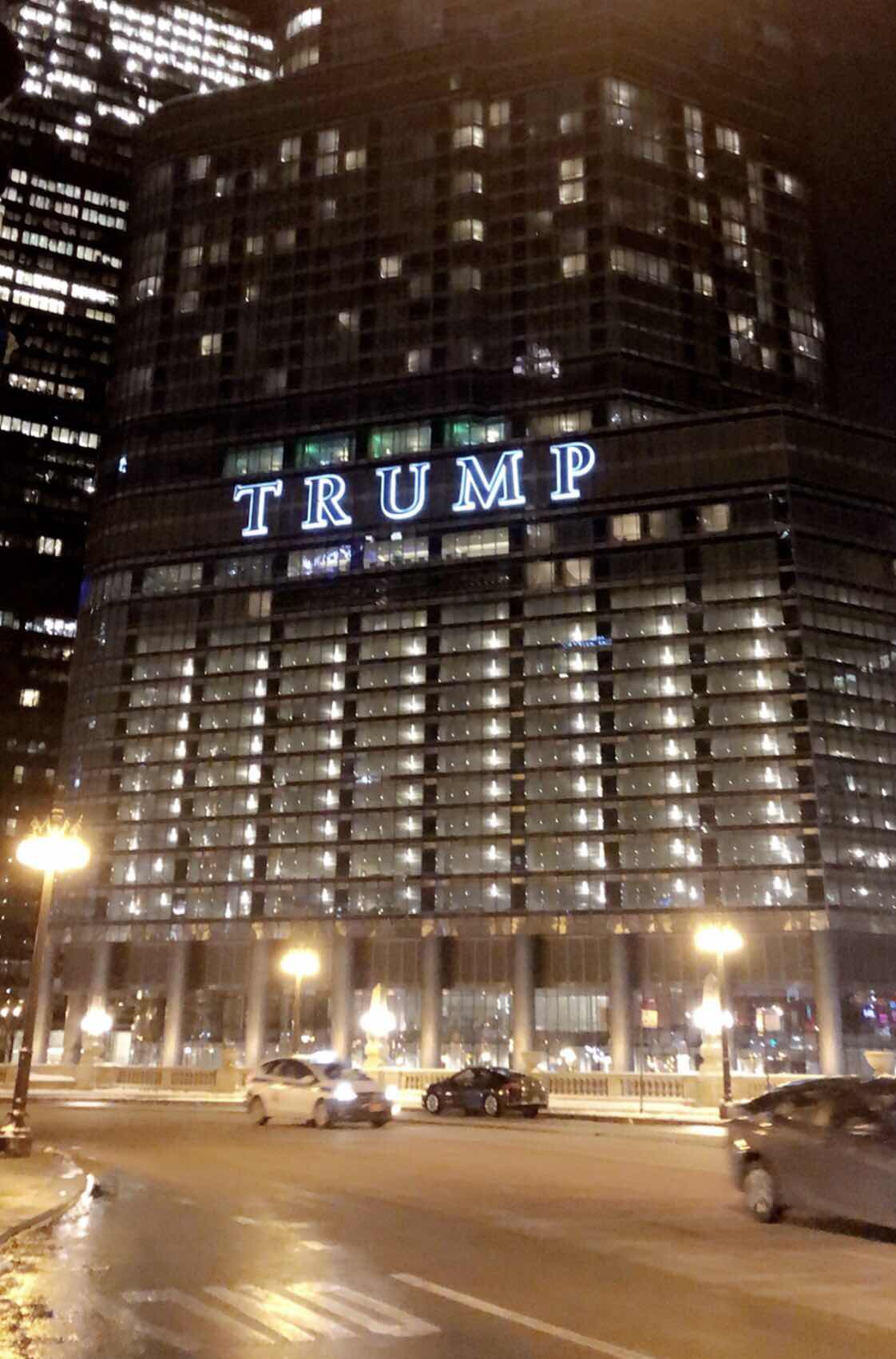 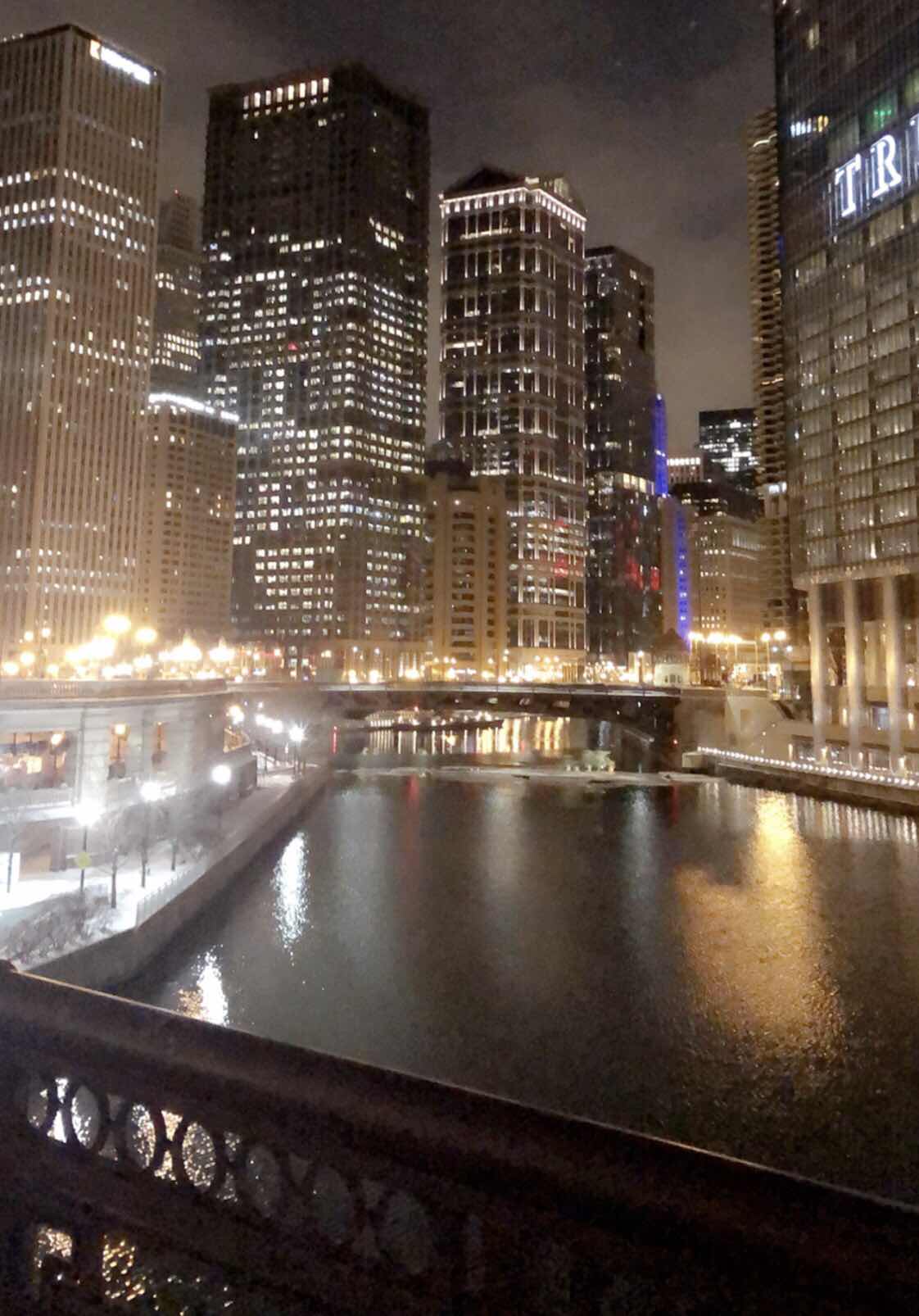 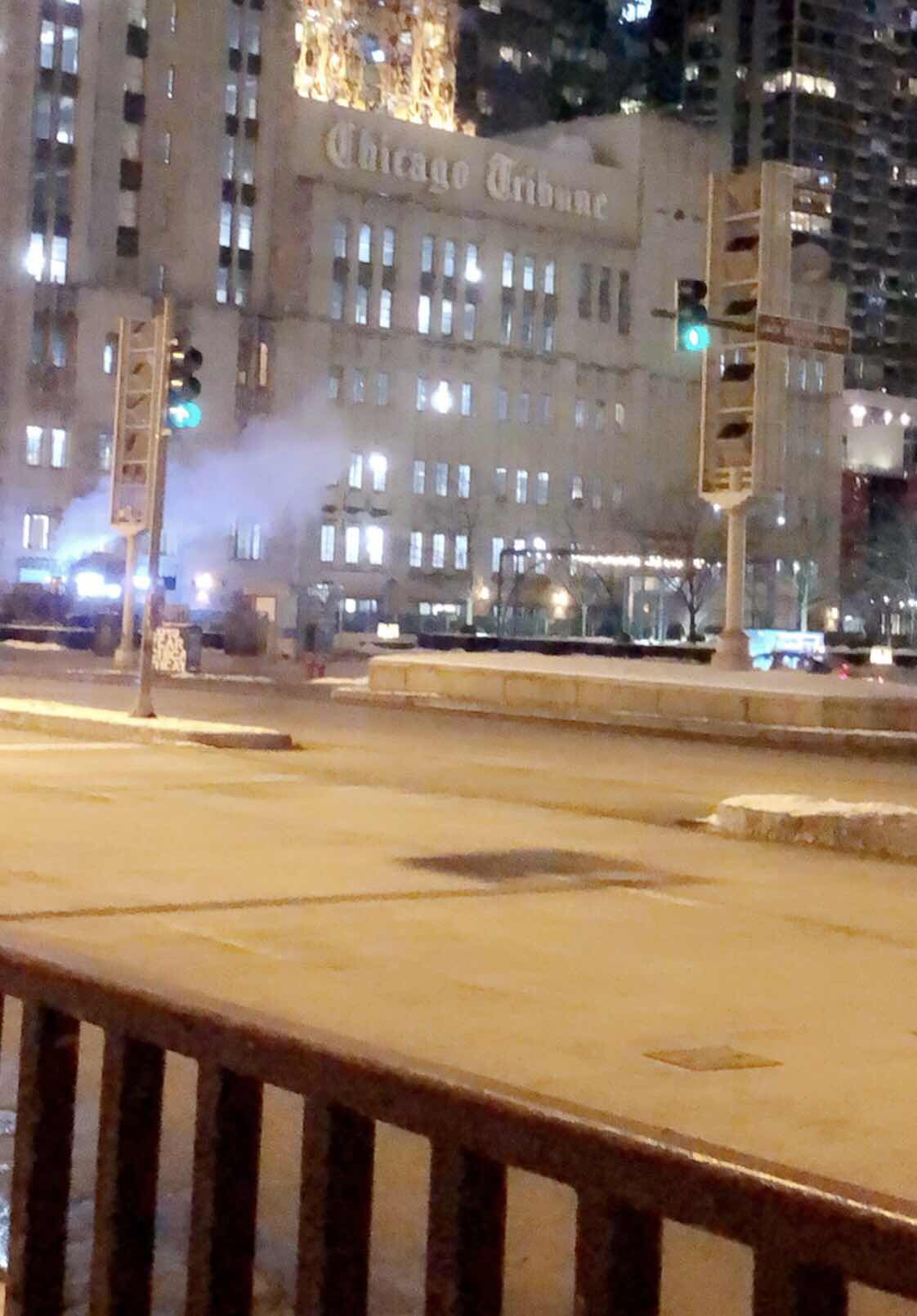 I continued on my walk and exploring but I was getting pretty cold. Not a whole lot of action was happening on a President’s Day evening in Chicago. I stopped by the Chicago Theatre and took a photo, thinking of Roxie Hart and singing ‘He Had it Coming.” 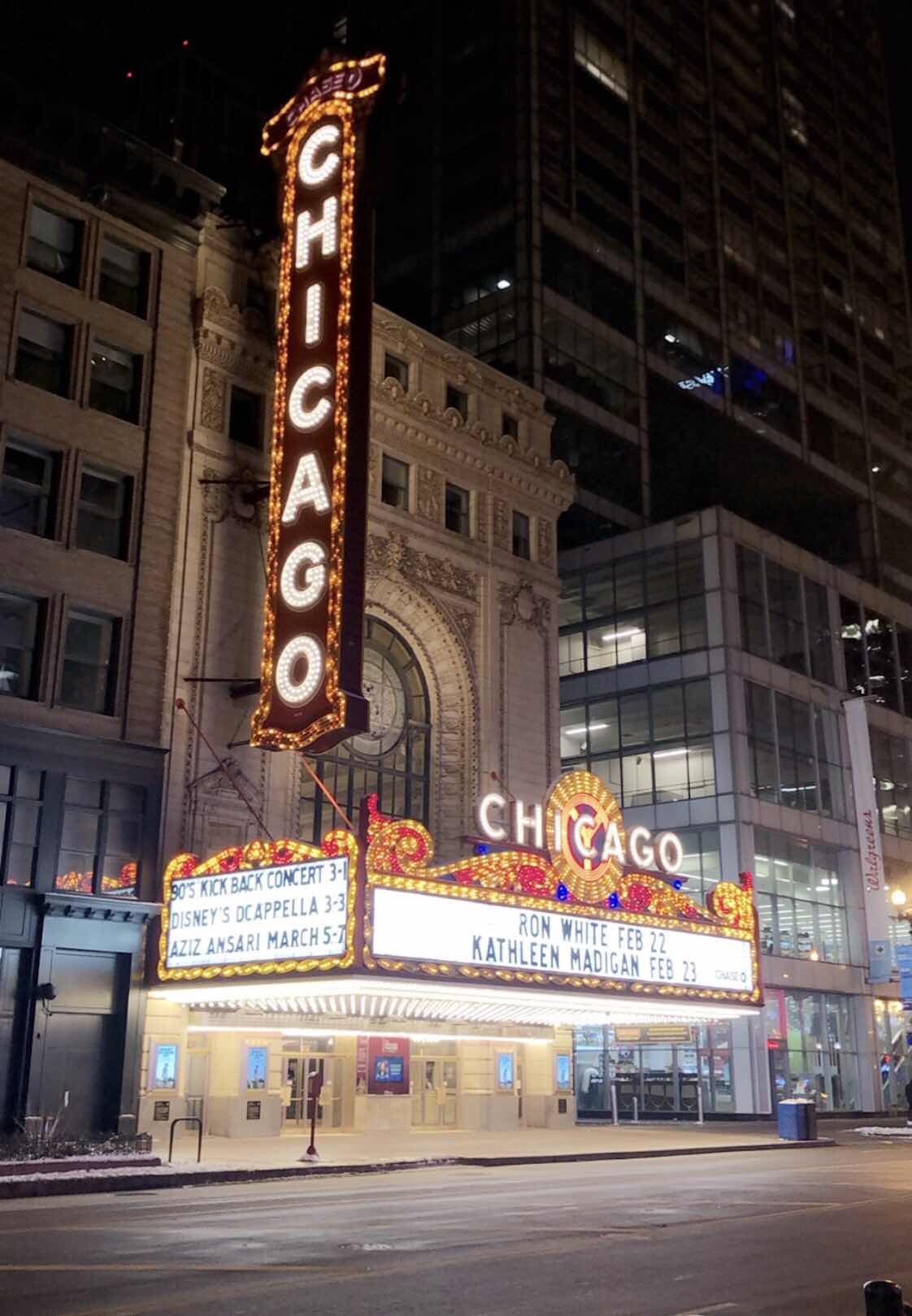 Per my Front Desk Agent’s referral, I stopped off at an English pub called Elephant and Castle. There were some 20-somethings enjoying themselves and an older gentleman at the end of the bar chatting with the bartender in a white shirt and black vest. I sat down and asked if they were still serving food. He handed me their selection of delicious offerings and I went with the pretzels and cheese and a local Revolution IPA. It was #MeatlessMonday and I had to make sure I didn’t consume the bacon bits I didn’t know came with the dish. 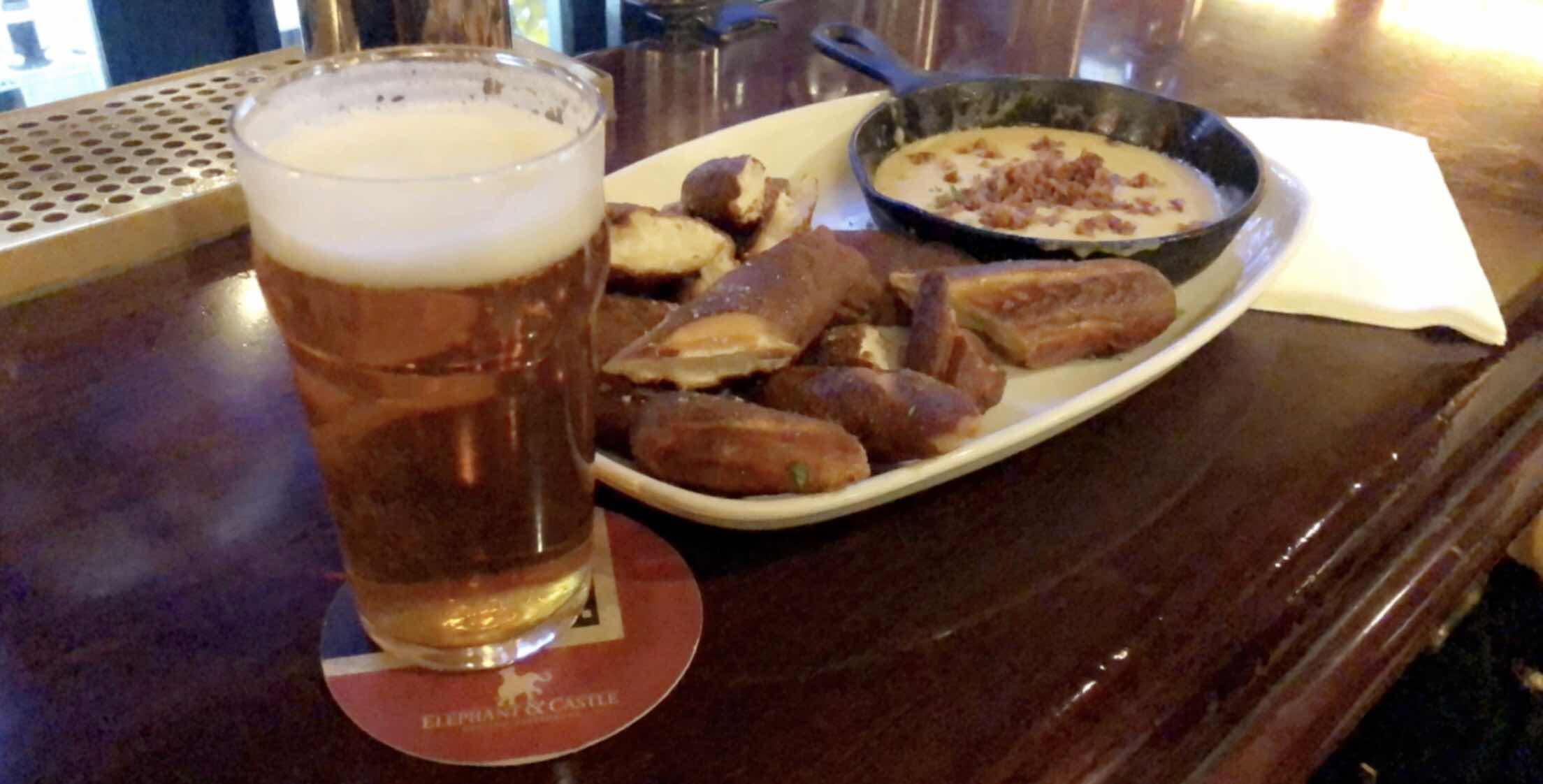 I was starting to get tired and I headed back to Hotel Julian to relax. The bed was comfortable and I turned up the heater pretty high to be pretty warm in my robe for the evening. The shower and its bathroom products worked really well. Check out was a breeze.

As I said, I got breakfast at Stan’s Donuts. I went with the Cronut. It was my third cronut ever and it was covered in sugar and filled with cream. My good friend, Stan, was sent pictures of this place. “Stan does it better.” 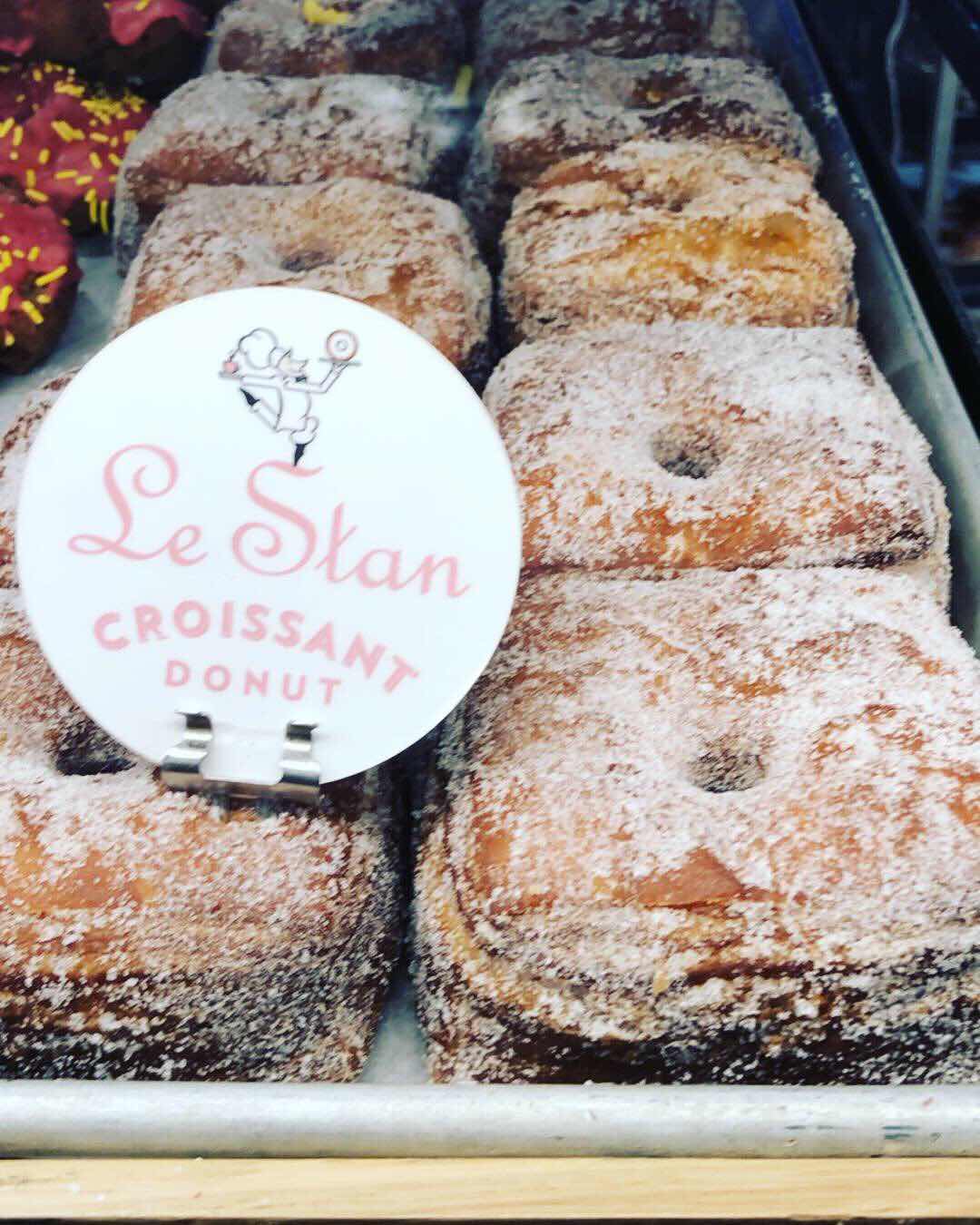 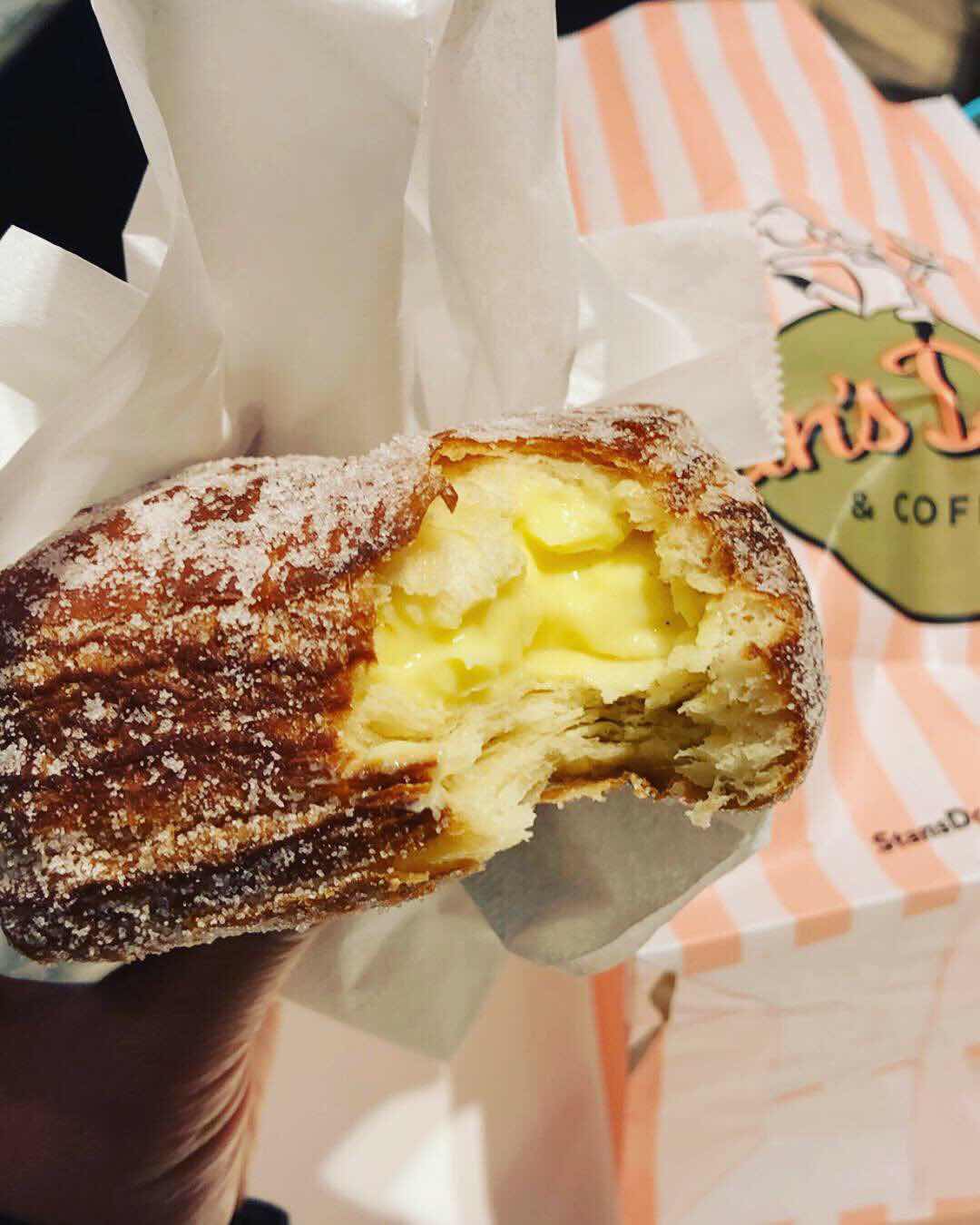 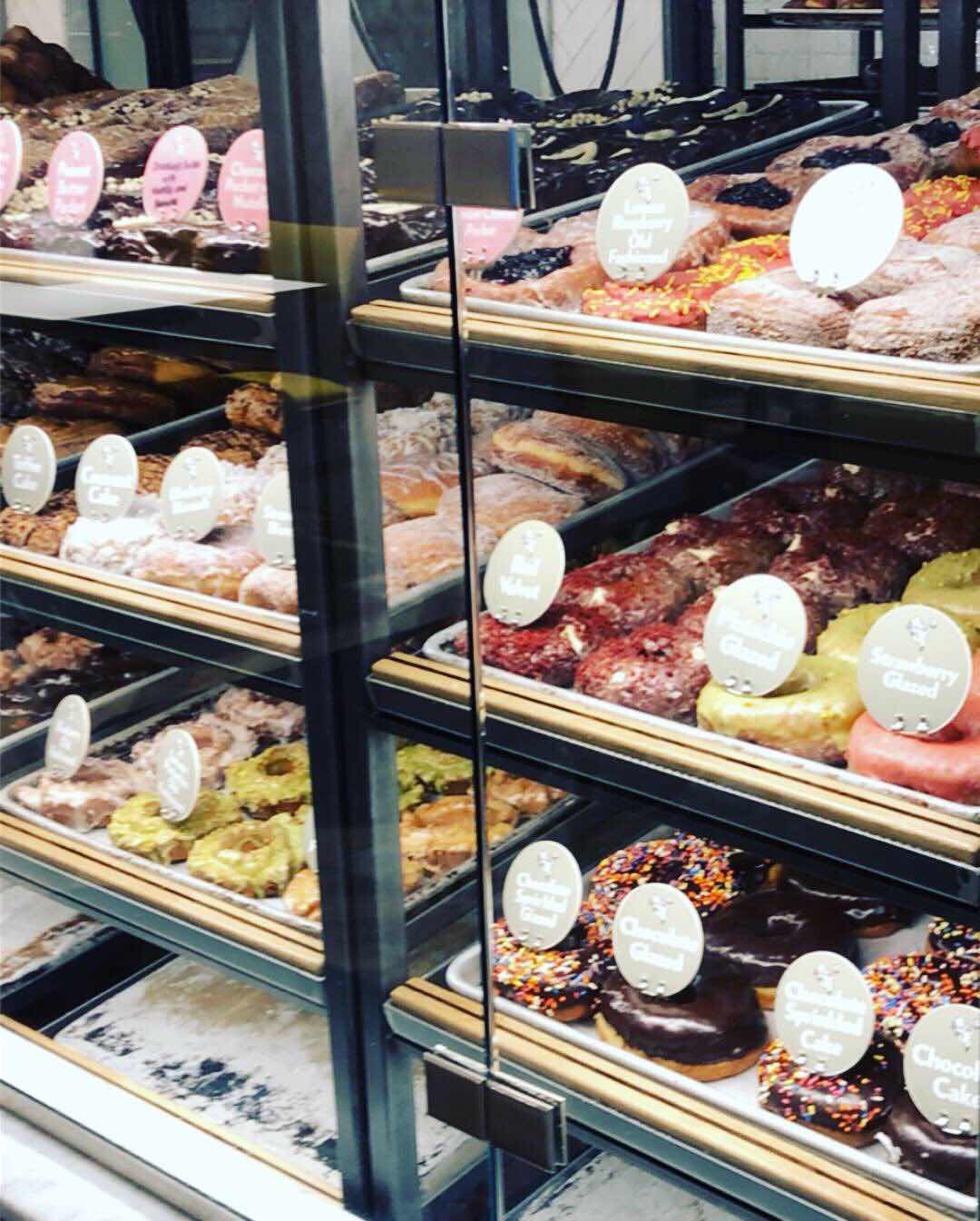 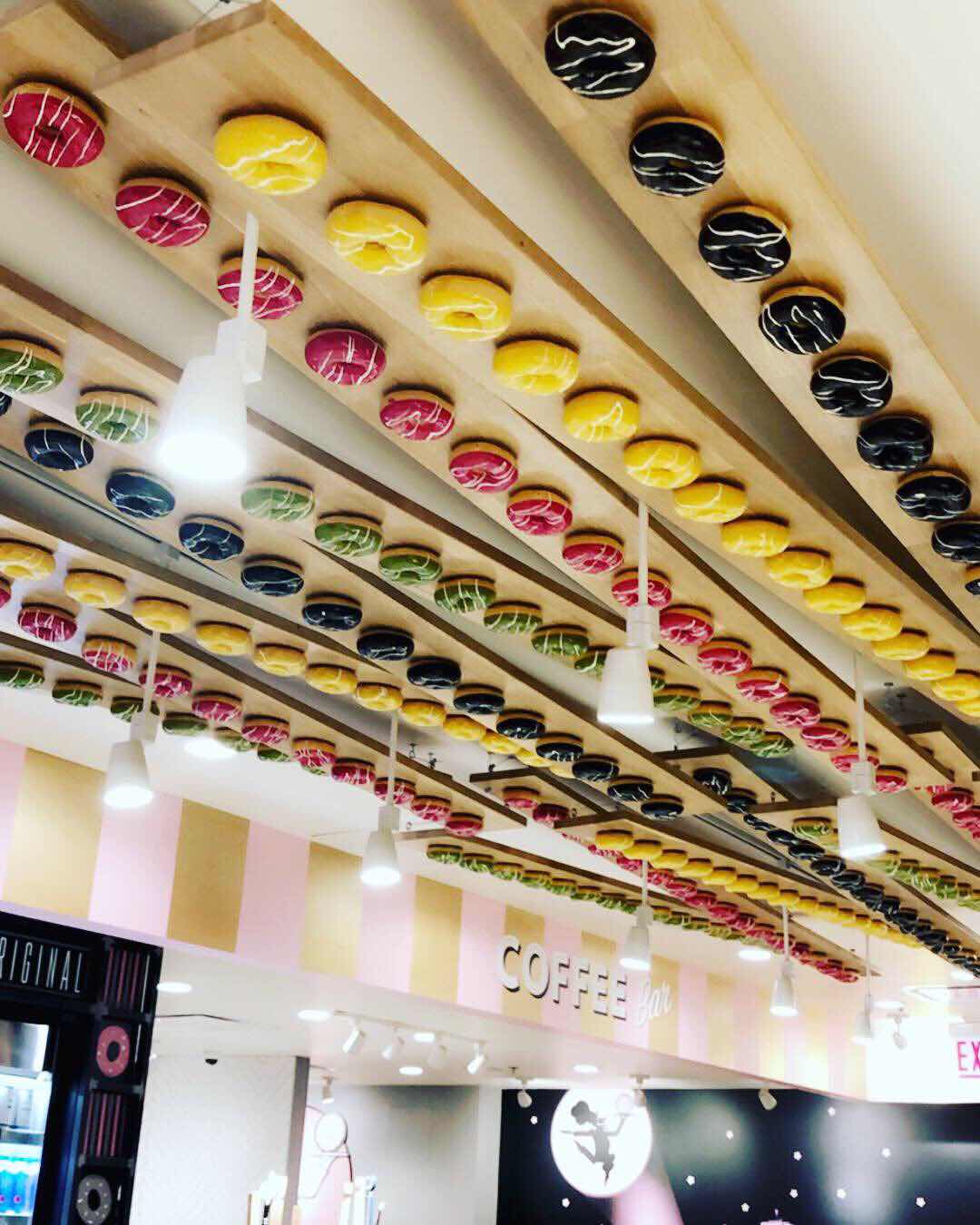 Then it was off to the airport. No flight delay, thank goodness. I will have to return to Chicago and visit friends here. Unfortunately, it was too late of a notice to meet up with anyone I knew. I’ll be back. Maybe with you!

8 thoughts on “A Few Hours in Chi-Town”